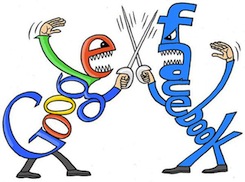 Google’s answer to the social networking media world has finally hit the web. Google+ was launched with a select number of invites being sent out, along with a steady stream of updated features. As might be expected, the evolution of Google+ has had its share of hiccups (i.e. the naming policy snafu), but it shows some real promise as a viable contender to Facebook. In fact, there are some areas where Google+ could really have an edge.

Here are 10 ways that Google+ can compete with Facebook:

The aforementioned naming policy, even though it created a stir with some users that resulted in some Google backpedaling, may actually work in Google’s favor in the log term. The original policy seemed designed to created an open environment that would be less conducive to trolls, spammers and the like. Once Google irons out some wrinkles in the area of privacy, I envision it as one of its core strengths.

This is a standout feature of Google+, in my book. It’s a far more user-friendly and intuitive tool for networking within your own selected networks. You decide how much overlap there is between friends, family, associates, etc.

A feature, also called the Sandbar, that will be universal to all Google services (Gmail, blogs, etc.) and something I suspect would ultimately become an extension that you can incorporate into your browser, much like the Stumble Upon toolbar.

Provided the Google+ Circles feature works as advertised, it could make their network an attractive alternative to Facebook for business purposes. The ability to separate business from social contacts would give Google+ a considerable advantage, provided their original policy backlash hasn’t burned too many bridges with potential business members.

The ability to make longer posts on Google+ could make it the preferred choice for some users who wish to share blog entries, newsletter updates, etc.

Since Google has designed Plus to be an integral part of its services suite, via the now ubiquitous black toolbar, users have a full complement of networking features (email, chat, video, search engine) at their fingertips with which to communicate.

An added feature to complement the Stream, Google’s version of Facebook’s Newsfeed,  Sparks generates unique content for each user based on their interests. It’s essentially a personalized search engine.

As owners of the premier video sharing site on the internet, it shouldn’t surprise that Google has introduced a feature whereby a Plus user could instantly upload videos to YouTube (or pics to Picasa), then share them with their friends.

This multi-user video chat feature figures to be a favorite among users who want the ability to chat real-time with their own circles of friends, all at once or one-on-one.

The Google+ mobile app for Android makes it easy to share content from your mobile device to your social account, and share it with your circles. Once Google+ gets itself setup for business accounts, this can be an even bigger plus.

This article was first posted at Internet Providers.