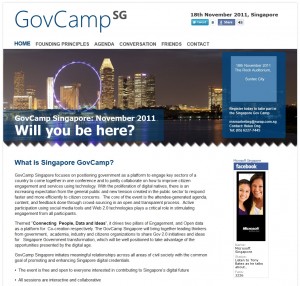 On November 18, leading thinkers from government, academia, industry, citizen organizations in Singapore – will converge together for GovCampSG. With the theme “Connecting People, Data and Ideas” the second-ever GovCampSG – the first was held earlier this year in January – will see an “un-conference” style conference will see a sharing of ideas that have the potential to shape and transform the future of the government and its citizenry.

One of the sponsors and organizers is Microsoft, who’d like to see the building of a community of like-minded individuals who care about Government 2.0 initiatives here in Singapore, and with the idea to bring together a diverse group of people who would not normally meet and to give them experiences on a national, as well as worldwide level.

“Microsoft aims to be a catalyst for Government 2.0 at the national level,” explains Stephanie Hung, public sector director for Microsoft Operations Pte Ltd. “We hope that GovCampSG will help spark new thinking and ideas, facilitate discussions that result in public sector innovation, and establish stronger bond between all stakeholders of a future we call “Government 2.0 and Society 2.0”.

“We want to be inclusive, open, transparent, and to look beyond the people who typically attend e- government conferences, in an effort to create a mix of people from the public sector, social media, non -profits, private citizens, and non-profits in order to foster creativity,” Hung adds.

GovCampSG is also a largely community-driven event, and the topics for discussion are created and will be facilitated by influential local bloggers including Chew Kay Lin, Kirsten Han, Mohd Hisham, Ridzuan Ashim and Preetam Rai, amongst others. The key topics at the event is around “Engagement” and “Open Data”, which should spark some lively conversations. “The recent efforts from our Prime Minister to make the government more open and inclusive, engagement from the various government agencies to the public and vice versa is becoming more important than ever,” says Hung. She gives the example of data.gov.sg, a recent initiative by the government to make data from the government accessible to everyone by creating a central catalog of data in a computer readable format. “This allows innovative ideas and analytical use of the data to create interesting applications never thought possible before.”

“We hope that GovCampSG will help spark new thinking and ideas, facilitate discussions that result in public sector innovation, and establish stronger bond between all stakeholders of a future we call “Government 2.0 and Society 2.0.”

You can submit and vote for your topics.