By Peter Fader, author of “Wharton Executive Education Customer Centricity Essentials: What It Is, What It Isn’t, and Why It Matters“ 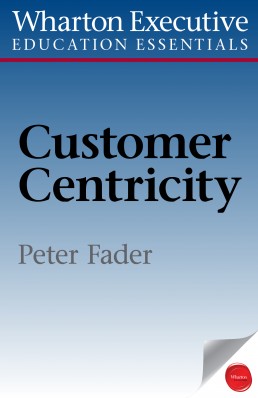 One of the biggest complaints I hear about a customer-centric strategy is that it’s too complicated. Sure, companies acknowledge that their customer base is heterogeneous. They understand intuitively that they have “good” customers — those who are willing to pay premium prices, renew their contracts every year, and require low service costs — and “bad” customers, those who tie up firm resources while giving little back in return. But it seems daunting to actually figure out who’s who, and to use this information in a day-to-day operational manner. Marketers are too busy developing snazzy ad campaigns to worry about such technicalities!

Take the issue of calculating Customer Lifetime Value, or CLV. In my new book “Customer Centricity Essentials: What It Is, What It Isn’t, and Why It Matters“, I define CLV as the present value of the future net cash flows associated with a particular customer. (Note that I don’t say “the customer.” Because after all, one of the basic principles of customer centricity is that there is no “the customer” — they’re all different!) But most companies that do CLV calculations tend to lump their entire customer base together and hope that differences will come out in the wash.

It’s easiest to understand the principle if we look at a contractual setting – say, a mobile phone plan or a gym membership. In the traditional CLV paradigm, each and every customer flips a coin – usually assumed to be the same coin – to make a decision about renewal. “The customer” will renew with some fixed probability equal to the average retention rate. So let’s say that a group of 100 people all join a mobile phone plan in the same year and that the overall retention rate is 85%. Using this logic, at the start of the second year, we would expect to see 85 people renew their plans. At the start of the third year, we would expect to see about 72 of them still “alive,” then down to 62 a year later.

The only problem with this method is that this smooth, gently declining survival curve in no way resembles what we see in reality. In the real world, we almost invariably see a steeper drop-off of customers in the first year or two, followed by a surprising flattening out in subsequent periods. In other words, the churn rate seems to slow down over time. Virtually every company explains this pattern by asserting that loyalty is increasing over time: customers engage with the firm and get to know its product and service offerings better. That sounds very nice and many companies count on this explanation as an unquestionable truth. Unfortunately it’s rarely correct. A more valid (albeit less intuitive) explanation is that these “churn dynamics” are merely an artifact of heterogeneity – with absolutely no changes in loyalty over time for any single customer.

So in contrast to the single-coin story described above, imagine that there are different coins, each associated with a different customer segment. Some flip a coin that is very renewal-prone, and some flip a coin that is heavily weighted towards non-renewal, or churn. In the first period, a large number of the customers with the churn-weighted coins would leave. Over time, as customers flip their coins again and again, many of the churn-prone customers would disappear, leaving us with a much more homogeneous customer base composed predominantly of renewal-oriented customers – just by natural selection. In other words, it has nothing to do with increased loyalty among individual customers and everything to do with a weeding-out of the bad customers. This is exactly how the world really works.

The implications for companies are huge. Rather than trying to bribe departure-prone customers to stick around with discounts and other goodies, firms should spend their resources finding more new customers who resemble the good ones. And as I explain in Customer Centricity, when companies fail to properly apply segmentation to their CLV calculations, they vastly and systematically undervalue the collective CLV of their customer base. In other words, by ignoring the heterogeneity of their customers, firms are literally leaving money on the table. Ironically, marketing managers are grossly undervaluing their “customer assets” instead of taking full credit for all of the value they have actually created.

This doesn’t mean that companies need to drill down to the individual customer level when applying their CLV calculations – that is, essentially giving each and every customer a separate coin to flip. On the contrary, I’m a big believer in the 80/20 rule when it comes to customer centricity. Even breaking the customer base into just two or three different segments can dramatically improve the accuracy of CLV measures and it doesn’t require anything more than a simple spreadsheet. But however granular they choose to get with customer data, the lesson is clear: firms ignore customer heterogeneity at their own peril. A few more coins means many more dollars – and you can bank on it!

Peter Fader, author of “Wharton Executive Education Customer Centricity Essentials: What It Is, What It Isn’t, and Why It Matters“, is the Frances and Pei-Yuan Chia Professor of Marketing at the Wharton School of the University of Pennsylvania. He is also the co-director of the Wharton Customer Analytics Initiative, an academic research center focused on fostering productive collaborations between data-driven firms and top academic researchers around the world. In 2009, Fader was named a “Professor to Watch” by the Financial Times, which discussed his interest in “the swathes of hard data consumers generate through their spending habits.”