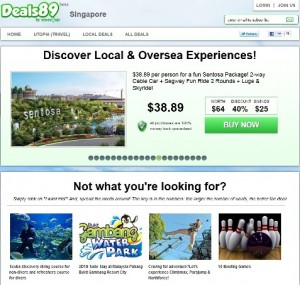 Deals89 (www.deals89.com) is a Singapore-based daily deals site by social commerce startup Storepair, and revolves around the idea of using social networking and crowdsourcing to offer consumers amazing local and overseas experiences. All the deals are uniquely priced with an ending notation of ’89’ cents, hence the name of the site.

Deals89 is founded by four 22-year olds – Eason Chan, Yugene Lee, Felix Tioh and Ng Chun Keat – who are still studying, the former three in the National University of Singapore (NUS), and the latter in Singapore Polytechnic. They started the site because of their love for technology, e-commerce, and especially of their interest in the daily deals, group-buying space. “Our ultimate goal is to build a platform to connect business owners and customers together,” says Eason Chan. Deals89 is their first iteration of how to do exactly that. “We have decided to kick start our project with a daily deals website, improve ourselves beforehand and start educating merchants about the conceivable aspect of online marketing.” He explains that they as they learn the ropes, they’ll improve and pivot their daily deal website in preparation for the future of the daily deals market.

The founders concede that the daily deals market has become competitive – there’s at least 50 daily deals sites in Singapore, with more popping up every other week. It’s also challenging that the majority of market share is held by the few key players such as Groupon Singapore and Deal.com.sg. The market, most believe, have gone beyond the point of saturation and seems ready to implode. But Chan and his fellow co-founders believe that there is still room for innovative and creative ideas in this space, and also why they put their focus on local and overseas travel and hospitality type experiences. “After a few months of experiencing ourselves in the daily deal industry, we found that daily deal space (still) has great potential.”

“We are not giving up and instead we focus on different niche markets and concentrate on building good relationship with customers,” insists Chan. “In addition, we will keep innovating our product and strategy by adding more features and implementing gamification mechanics.”Already, there are some differentiating features – Deals89 allows customers to request for deals they desire, such as customizing their own travel journey, a novel way of social engagement between consumers and merchants.

And their words to an entrepreneur is a line used by the late Steve Jobs to lure PepsiCo’s John Sculley to join him at Apple Computer – “Do you want to spend the rest of your life selling sugared water or do you want a chance to change the world?”