The fashion industry has been one of those to embrace new technological trends – from online shopping to group buying, the industry is one open to constant experimentation. So when a 24-year old graduate from Brown decided it was time for a new, innovative way to hunt for and buy fashion online, she introduced her own with NMRKT.

NMRKT, pronounced “in-market”, is a fully interactive e-magazine featuring the latest emerging, up-and-coming fashion designers in New York City. Founded by Julia Jacobson, the online publication actually allows you to hunt and shop for fashion via “Shop Films” – short films featuring emerging celebrities and tastemakers wearing fully-styled looks. These films allow for 360 degree views of the products, as well as an editorialized context along with how-to style ideas. When the film freezes, numbers pop up on each item for instant gratification click- to-purchase. 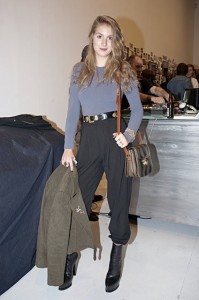 Jacobson have been in the fashion industry since graduating in 2007, starting as an associate buyer of men’s accessories at Bloomingdale’s in New York and growing up the ladder. But she left earlier this year in July to start NMRKT. For the first six months Jacobson consulted as a freelance buyer and website director for New York online retailer INVEN.TORY NYC while she gathered an NMRKT team and formed the company.

Jacobson is convinced that fashion is her calling, and she fully intends to stamp her mark – and her personal style – on the fashion world with NMRKT “My style is inspired by my mother, whose Japanese, avant-garde designer filled closet was a regular playroom for me growing up, and currently, by the eclectic group of friends I hang with,” explains Jacobson.