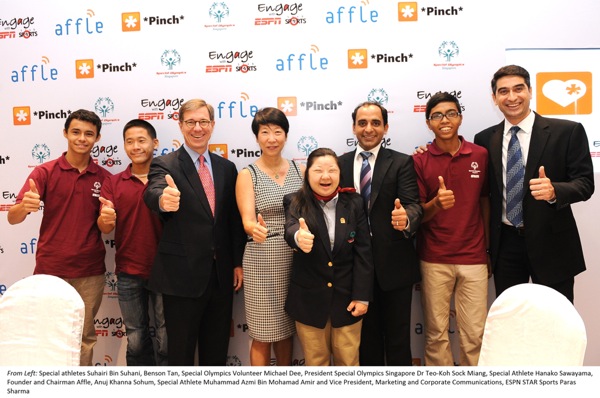 Funds are raised in two ways: all proceeds from the download of the mobile app – at $0.99 each – will go towards the campaign, as well as a sub-application within Pinch that allows consumers to donate directly to the campaign. ESPN Star Sports will be extending on-air exposure on its networks for airing commercials promoting the initiative over a two-month period.

“Pinch A Dollar brings the power to make positive contributions to the hands of the users, literally,” says Anuj Khanna Sohum, founder and chairman of Affle. “Smart phone users in Singapore can now download Affle, donate a dollar or more and spread the good word about the Special Olympics movement with the help of in-built social plugins.”

“We hope to inspire consumers to come forth and participate in the Pinch A Dollar movement,” he adds.

The Problem with Philanthropy

The more skeptical amongst us, of course, may decry that this CSR initiative by Affle is merely one that is but a user acquisition drive masked by philanthropy. Affle‘s executive director for Southeast Asia Ben Fones conceded that may be the impression some people may go away with when they hear about the initiative. He also said that the support for Special Olympics Singapore first started off as an opportunity while the team was in talks with broadcaster ESPN STAR Sports, whose association with the largest sports organization supporting children and adults with intellectual disabilities go way back to 2006.

“But the more the Affle team interacted and spoke with the Special Olympians, we decided this was the right thing to do,” explains Fones. Affle chairman Sohum even said – at his speech during the press conference – that his 5-year old company of 70 people was on board as a volunteer and not a sponsor, underscoring the role he hopes his company will play.

The truth of the matter is that the athletes of the Special Olympics – yes, they are athletes every bit worthy of the term – need as much help, support and financial backing as they can get. They have hopes and dreams just like any able person, and if any organization or individual wants to step out and help them, we should applaud them in every way.

Shoutout to a few of our Special Olympians

Present in the photo are four exceptional young Special Olympians that deserve mention:

– Hanako Sawayama, keynote speaker for many prestigious events, and mentor to young athletes,

– Benson Tan, 20, with a total of 6 Special Olympics Gold medals for Swimming, 1 Silver and 1 Bronze, as well as 1 Silver Medal for Basketball,

That’s more achievement than most of us can say.