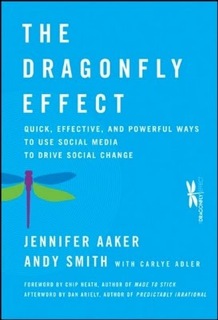 Co-authored by Stanford University Marketing Professor Jennifer Aaker and her husband Andy Smith, a leading marketing consultant of Vonavona Ventures, “The Dragonfly Effect: Quick, Effective, and Powerful Ways To Use Social Media to Drive Social Change” offers a recipe for social change leveraging on the power of social media. Unlike many other books on social media which are strong on examples but weak on structure, the book proposed a systematic design thinking oriented process which anybody can follow.

Tapping the diverse fields of social media, marketing strategy, and consumer psychology, Aaker and Smith pepper their central thesis with many interesting case studies. These include micro-lending initiative Kiva, TOMS’s one-for-one shoe movement whereby the company will donate a shoe to underprivileged kids in return for a shoe bought, and of course Barack Obama’s presidential campaign.

The most memorable example was that of Team Sameer and Team Vinay, a heartfelt story of how friends belonging to the South Asian community in the United States came together to find suitable bone marrows to save their stricken friends’ lives. Through the power of citizen activism, grassroots networks and social media, the teams recruited 3,500 volunteers, achieved more than one million media impressions and garnered 150,000 visitors to their websites.

How does the Dragonfly Effect work? Principally, there are four “wings” of the model: Focus, Grab Attention, Engage, and Take Action. Mirroring the way a dragonfly uses all four wings to propel itself, these phases can be represented by the model below: 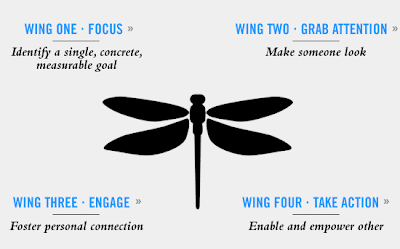 Courtesy of the Dragonfly Effect

For Wing 1, Focus, one should identify a single, concrete and measurable goal. This should adopt the acronym HATCH, ie

Humanistic – focusing on who you want to help;
Actionable – tactical micro goals (low hanging fruits) that culminate in a long-term macro goal;
Testable, i.e. with metrics that help you to evaluate your progress and deadlines, and to celebrate small wins along the way;
Clarity, i.e. keeping your goal clear to improve your odds of success while generating momentum;
Happiness – ensuring that your goals are meaningful to you or your audience.

For Wing 2, Grab Attention, the acronym PUVV is used instead, i.e.

The next Wing, Engage, involves embracing a TEAM acronym as follows:

Tell a Story – Compelling, sticky stories to convey critical information;
Empathize – As you engage, let your audience engage you, and create narratives that compel them;
Authentic – True passion and sincerity is more influential and emotionally resonant;
Match the media – How and where we say something is as important as what’s being said.  Align one’s message with the context.

In the final wing, Take Action, its design principles is embodied in EFTO…

Easy – Yes, making it easy for others will increase your chances of success.  Don’t make them leap through hoops;
Fun – Use elements of game play, competition, humor and rewards to make people “feel like kids” again.  If it ain’t fun, nobody will do it;
Tailored – Customize the programs to unique individuals and groups with specific interests or skills for greater impact;
Open – Provide your point of view and story, and allow people to act without having to ask for permission.

Overall, I found the book very instructive and useful, with a step-by-step approach that anybody wanting to create a social movement can do.  The case studies cited dive into pretty specific and pragmatic details which one can emulate, and they also cover the unique properties of different social technologies like blogs, Facebook, Twitter, YouTube and others without belaboring the point.

Perhaps the most meaningful message I got from the book came from Al Gore, former vice president, who once said, “If you want to go quickly, go alone. If you want to go far, go together.” By staying focused and concentrating on small acts that drive big change, “The Dragonfly Effect” provides a useful guide for social activism in Web 2.0 age.