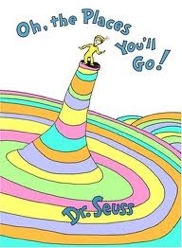 One of the few near-universals shared by humans across the usual barriers is the dream of success, though definitions obviously vary between individuals. Some embroil themselves in racking up good grades. Some enjoy that warm and fuzzy feeling that fills the heart from acquiring as many material goods as possible. Others prefer taking a spiritual or filial route towards happiness and stability. Considering its pervasiveness and potential for philosophical exploration, success and failure make for a pretty common literary theme. And — oh hey — here’s some nifty little examples!

Lists like these exist as equally subjective as anyone else’s, so please do contain that internet rage. It really is most unbecoming.

A cliched (but still utterly awesome!) graduation gift, Oh the Places You’ll Go! offers up unconditional positive regard meant to inspire readers. It might not necessarily be “about” success, but on dreary, unproductive days the good Doctor Seuss can still slap a smile on someone’s face!

Paul the Peddler by Horatio Alger

Pretty much any of Horatio Alger’s formulaic “rags-to-riches” works could end up on a list like this, because he was all about bootstraps and pluck. This simple tale follows an entrepreneurial spirit climbing up the socioeconomic ladder: not the only measure of success by any means, but still one people often consider.

The Bell Jar by Sylvia Plath

The narrative of a young, mentally ill ingenue slowly unraveling seems like an unorthodox inclusion here, but actually makes perfect sense. Readers just have to finish the novel to decipher the message of resilience and second chances, something oft-marginalized individuals with psychiatric disorders understand all too well.

The Diamond Age by Neal Stephenson

Dystopian settings offer up numerous narrative possibilities about maneuvering near-impossible obstacles, and this post-cyberpunk classic provides one of the most energetic, sterling examples. When an educational compendium for young ladies falls into a whip-smart, impoverished girl’s hands, it proves the arbiter of an epic, equitable and thankfully successful social overhaul.

By the end of this ultra-slick postmodern read, billionaire protagonist Eric Packer has lost all his fortune on a risky yen investment, and he couldn’t be more enthused, even rejuvenated. Here, obscene wealth ultimately proves tedious and unfulfilling, as true success cannot be measured with money.

Central character Siddhartha does not ultimately attain nirvana at the end of his bildungsroman, but that doesn’t mean he necessarily failed as a man … or even a monk. Everything that happens to him throughout the book’s course means valuable life experience – a key ingredient in many (if not most) successes, spiritual or otherwise.

Throughout eight stories, the eponymous educator works hard at winning her students’ affections and motivating them to constantly better themselves. Author Sarah Shun-lien Bynum earned a nomination for the 2009 PEN/Faulkner Award for this charming tale of personal and professional achievement.

Though a political allegory, Animal Farm sports one of literature’s most famous examples of power not necessarily equating success. Although the pigs lead an effective revolt against their farmer, they begin to fail once they succumb to their own selfishness, which eventually renders their efforts completely hollow.

The Man in the Gray Flannel Suit by Sloan Wilson

Protagonist Tom Rath makes more than a few egregious mistakes when racking up the corporate successes dictated by the American Dream. In the end, however, he realizes how family completely trumps career achievements and adjusts his lifestyle accordingly.

The Secret by Rhonda Byrne OK. So. This bestseller everyone’s talking about? The one guaranteed to land you pretty much everything you want as long as you just BELIEVE IN IT hard enough, like in a Disney movie or something? Yeah. Don’t do anything it says, because achieving goals actually involves blood, sweat, tears and generous shots of luck and not sitting around eating bonbons and daydreaming. The Secret is pretty good for a few laughs, though.

Half literary criticism, half memoir, this stirring social justice narrative takes readers to Iran’s educational underground, where women open up and learn from forbidden books. True success involves placing human rights ahead of squelching laws and recognizing the potential and dignity inherent to all people.

Learn about one of the 20th century’s greatest civil rights leaders, who nonviolently (but not singlehandedly!) expunged British imperialists from his beloved India. In his own words, he outlines the hows and whys behind one of the most startling and successful national emancipations in history.

The Overachievers by Alexandra Robbins

Although she looks at adolescents pushing themselves too far in the pursuit of success, what Alexandra Robbins shares about their struggles transcends age boundaries. Massive social change needs implementing if parents hope to raise healthy, functioning kids — much of which certainly applies to workaholic adults as well.

I Know Why the Caged Bird Sings by Maya Angelou

Treasured American poet Maya Angelou shared the triumphs, tragedies, heartaches and heartbeats that propelled her to international creative and academic success. Her compelling life story serves as an excellent inspiration to anyone faced with seemingly insurmountable personal or professional obstacles.

Americans today take the polio vaccine for granted, as most (thankfully) never experienced the disease’s ravages firsthand. The rich story of its creation, littered with plenty of evocative emotion, remains a necessary, inspiring read about a heavily influential, life-saving success.

20 Years at Hull-House by Jane Addams

Philanthropist and activist Jane Addams co-founded Hull House with Ellen Starr as a means of welcoming new immigrants and providing them a nurturing, loving and supportive community. Their successful settlement house should inspire anyone to think about the needs of marginalized peoples and working towards promoting equality over exclusive self-interest.

The Right Stuff by Tom Wolfe

Heroism and courage in the face of serious danger form the crux of Tom Wolfe’s New Journalism classic, which intimately explores the seven Project Mercury astronauts — many of whom enjoy household name status today. Even when panicking or making mistakes, they still come off as fully human individuals who just happen to work in extraordinary (and extraordinarily dangerous) and pioneering scientific circumstances.

My Left Foot by Christy Brown

From birth, doctors tragically dismissed Christy Brown as a useless burden because of his cerebral palsy, though his determined mother believed otherwise. Thanks to her unconditional love and support, the young man eventually learned how to write and spell with his left foot, and went on to write a book about his hopes, successes and treatments.

The Art of Happiness by His Holiness the Dalai Lama and Howard C. Cutler

Chained to the Desk by Bryan Robinson

Workaholism is just about the only addiction society actively encourages, but it still involves the very same heavy emotional, social and physiological tolls on mind and body alike. Success means striking a healthy work-life balance, not allowing career pressures to completely overtake all else.

This article was first published on OnlineColleges.net.