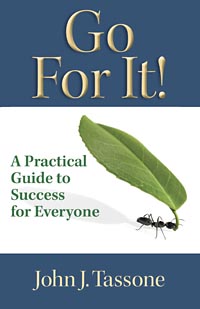 I’m usually very wary of any book that claims of being a guide to success. But “Go For It!” by John Tassone, a straight-talking, shoot-from-the-hip kind entrepreneur in the insurance industry, was seriously an enjoyable read.

One of the reasons is that I personally agree with Tassone’s own definition of “success”. Success, he believes, is not about having a lot of money. Here’s his definition:

“I firmly believe that success is when you reach a pint in life at which other people seek you out for your advice, your opinions, your help and your guidance. It’s when others come to you with their questions, and want to know how you would handle a certain situation or problem. When you reach that level, I believe you are either already successful or are on your way to becoming successful.”

Tassone distills much of what he’s learnt on the streets of Chicago, as an employee in the steel industry and as a self-starter in the insurance industry into the book. Reading through it, it didn’t feel as much a practical guide of success as it did a personal recount from a favorite grandfather. You can sense a genuine love for what he does, how he did it, and how he’d want you to share that kind of success.

And his stories and insights are simple a delight to read. Here’s a sample of some of them:

Your life is an epic story in itself, whether you want to believe it or not. Know your path, and know where you are going. Don’t stop and look around because you think the grass is greener somewhere else.  It probably isn’t. Instead of worrying whether the grass is greener somewhere else, devote all your efforts to improving your life and making it the best it can be for yourself and your family.

Yes you must have goals, but take the accidental goals that fall in your lap along the way.

Christopher Columbus set out to find a faster route to the rich trade goods of the Indies by sailing westward with the intent of making it around the world. Oh well, he just discovered America.

Alexander Graham Bell was trying to invent a hearing aid to help his deaf mother. Oh well, he invented the telephone.

About 12 years ago, a friend lost a job at the hardware store and joined the ranks of the unemployed.  John suggested he create a menu of all the things he was capable of doing as a handy man and plastering the neighborhood with photocopies.  The response was so astounding he created his own successful painting business.

You can’t sit back and say “I’d really like to do that” or “I hope I can do it,” or “That’s my goal and I want to achieve it”.   You have to say “I’m going to do it,” and that no other option, outcomes, or excuses are acceptable.

In 1937, America’s military was ranked 19th in the world behind Poland. The Life magazine photo from 1938 showed an aerial view of what was described as half of the nation’s entire mechanized military. You can count 146 trucks, tanks, jeeps and about a dozen motorcycles. We won World War II. We decided to win.

“Go For It!” is chock-full of old-school but still relevant advice, from believing yourself and the art of selling, to starting your own business and having a positive view of things. It doesn’t read like those power-of-positive-thinking kind of quack advice that is too prevalent in self-help books these days.

If you’re in the insurance line, you’ll definitely benefit from this book. And even if you’re not, I have a feeling you’ll enjoy reading this book.