“Never was so much owed by so many to so few” – these famous words were uttered in a wartime speech by Sir Winston Churchill, referring to pilots of the Royal Air Force in defense of Britain during World War II. But those same words could easily be applied to the Singapore-based technology entrepreneurs present at Techventure 2011.

The two-day conference, an event which has gathered many in the Asian venture capital community to engage with the latest technology entrepreneurs from the region, showed just how much Singapore, and its government through the National Research Foundation (NRF), is banking on these budding entrepreneurs and their newest and latest in technological innovations for the country’s future.

Just a bit of background – the high-tech start-up scene in Singapore is said to be growing healthily in recent years. Here are some interesting statistics shared:

With these encouraging statistics, perhaps it’s little surprise the local authorities realize that high-tech startups are horses worth putting money on.

The NRF just announced that it will be opening up the application process for its Technology Incubation Scheme (TIS) to allow more investors to set up technology incubators under the scheme. The hope is to get even more experienced investors and entrepreneurs to invest in local startups and provide them with systematic management guidance and mentorship.

And while there are currently there are seven incubators under the program, including Neoteny Labs and Plug and Play, the effort to boost the pool of investors and incubators should see more early-stage, high-tech startup companies in Singapore get nurtured.

“The incubator managers have been actively making their investments in a good number of high quality startups,” says Dr Francis Yeoh, the CEO of NRF. “All funding goes to the startup and all efforts are directed to make the startup’s success, because no one benefits otherwise.”

Global Money Flow – From the West to Asia

It was also evident that Asia is becoming the darling for technology innovation, and is increasingly attracting the attention of financiers – venture capitalists, angel investors etc – from all over the world.

“Increasingly, attention is shifting from established Western markets to our part of the world, and we believe Asia will increasingly drive venture capital and private equity activities in the future,” says Eugene Wong, chairman of the Singapore Venture Capital Association (SVCA). “Asia is well known as the current region of growth, with rising inflow of funds and investments. This year’s Techventure conference aims to capitalize on the wealth of promising talent, innovations and technologies in Asia, which are waiting to be discovered by venture capitalists and private equity players from around the globe.”

The flow is not limited to money as well. Talent, as well as technology, is flowing in this direction. 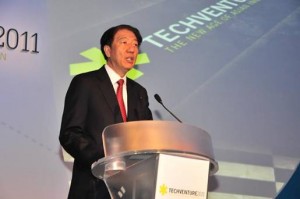 But there are still many challenges facing high-tech startups in Singapore. Despite the money flowing towards Asia, most startups surveyed in Singapore cited funding as a key impediment to attaining their growth aspirations, due to the costs involved in expanding their businesses.

The need for continued innovation was also seen as a growth factor, since figures – given by Singapore deputy prime minister and chairman of the NRF Teo Chee Hean in his opening speech at Techventure – show that innovative start-ups register annual average growth in sales  of 118-percent in the past three years, three times higher than those which had not introduced new products or services (39-percent).

And unlike counterparts in the West, Asian startups tend to prefer develop their technology in-house (about three-quarters of those surveyed), rather than tapping on external sources of R&D. In particular, the level of R&D collaboration with and IP licensing from universities and public research institutes remained relatively low among high-tech firms.

But all in all, it’s still early days for the Singapore technology entrepreneurial scene. Perhaps next year’s edition of Techventure will show just how far we’d go.