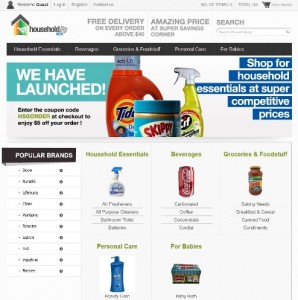 Many of us have fond childhood memories of grocery shopping with the family during weekends; I still recall struggling to lug heavy bags of groceries home from the supermarket, as a young boy, just to prove to my parents I was grown up enough to help. It was character-building for sure, but it wasn’t exactly fun.

For most people, shopping for household items and groceries is possibly one of the most troublesome, time-consuming and repetitive activities around. But with changing consumer trends and the benefit of technology, some startups are beginning to look at ways of innovating the grocery shopping experience for the better. One of the latest in Singapore to try is Household.sg (www.household.sg), an online supermarket with a focus on household essentials and groceries. As a concept it’s nothing too new – users basically browse the site, select common household items to purchase, and arrange for their items to be delivered at a preferred timeslot. What’s new though, is Facebook integration, so users can simply log in with their Facebook account.

“We feel that the time spent on (grocery shopping) could be better spent elsewhere,” says Reuben Lee, sole founder of Household.sg. Lee, 23, is still a student in the National University of Singapore (NUS) where he studies computing. “Household.sg was created to solve this problem.”

His Story of e-Commerce

Despite his young age he’s no stranger to entrepreneurship or e-commerce – he previously started the now-defunct online bookstore Zakoola (www.zakoola.com). He’s also taken the hard-earned lessons from his earlier startup to heart. “That startup grew pretty quickly, and within three months we had over 600 paying customers,” Lee recalls. “However, I quickly found out that there were other aspects of business that were equally, if not more important, than simply getting paying customers. I ran it into the ground.” He’s also always been a fan of e-commerce, trading items on online forums and eBay. “The most memorable one was the iPhone version 1, even before it hit our shores. Parallel importers like myself then were making S$200 profit per piece we brought in!”

His idea for Household.sg came up during one of his frequent grocery expeditions to the supermarket with his mother and brother to purchase household necessities. “Not that I didn’t want to help out, but I figured the time and effort spent on this could be better spent elsewhere, in terms of family bonding. The grocery store is only a few blocks away from our flat, but it would be too much of a hassle to buy our detergent, shampoo, rice, drinks and snacks in one trip.” So the intrepid lad set out about studying the online grocery industry in earnest, and found that while online supermarkets are hugely popular in the U.S, Europe and China, it wasn’t quite so in Singapore.

Lee couldn’t find a Singapore-based solution he would use, and so he set out creating his own.

Lee acknowledges that Singapore is a small market in terms of customers. “We don’t fool ourselves about it,” he says. “However, if we are to do our job well, this small market is still pretty significant in terms of potential revenue due to the nature of the industry.” The company’s unique selling point? Customer service. “We could offer levels of service simply not possible elsewhere,” Lee asserts. He adds that the logistics play at the end of the day, and there is pretty much no limit to the level of customer service the company can offer. “Imagine if you can order anything and it’ll arrive at your doorstep within an hour.”

Lee says that Household.sg‘s is predicated on building a central distribution center that services end customers all over the country, as opposed to the traditional replication of stores in different geographic areas. He points out that the main competition, Cold Storage and NTUC Fairprice, have online presence but aren’t innovating in this space. “There is huge opportunity for a startup to change this industry,” he says.

But the company is facing a major challenge – trying to get suppliers and manufacturers to deal with them, and build their own supply chain. “I’ve been bootstrapping the company since its inception, and it’s really difficult to build a supply chain with limited funding,” Lee admits. “When you’re three months old, suppliers aren’t going to bother dropping off goods at your place, and not to mention offer you terms of credit. We’ve had to come up with interesting ways of going around roadblocks.”

But he says there are some suppliers and manufacturers that treat them with great respect. “The best way to repay this kindness is to do more business with them.”

Currently, the company’s main form of marketing is through online marketing and traditional flyer distribution. “We are growing steadily by the day, and as cliche as it sounds, word of mouth marketing really works,” Lee says. “By exceeding the expectations of every customer, they are going to tell 10 of their friends about us. This process takes plenty of time and effort, but we are getting there.” Household.sg soft-launched the website in late May 2011 and have been fulfilling orders daily ever since. In fact, orders are growing fast enough for Lee to contemplate taking a leave of absence from his studies next semester to further grow the business. 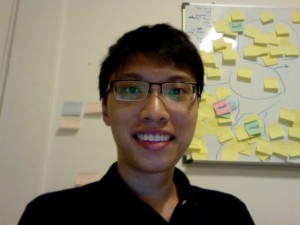 “I think that before one embarks on the journey of building a business, he needs to be clear on what he has to go through,” Lee reflects. He says that there is today too much emphasis is placed by the media on the glory that successful entrepreneurs enjoy, but not enough is being discussed about how close they came to certain failure, the loneliness entrepreneurs face, the difficult decisions they had to make, and how unbelievably hard they had to work.

Lee particularly liked one interview he saw with English entrepreneur Sir Alan Sugar, who founded electronics company Amstrad and is a previous owner of London-based soccer club Tottenham Hotspur – who said, “Richard Branson didn’t wake up one day and decide to build an airline. He was working hard from a small shop somewhere, building up his empire.”

And that’s exactly how Lee wants to do it.