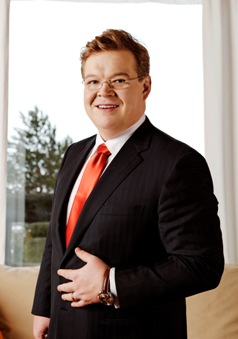 Leading business information architect and IT entrepreneur Pekka A. Viljakainen’s was recently in town to give a talk and promote his book “No Fear: Business Leadership for the Digital Age“, and we were fortunate enough to catch him for a short interview to talk about how business leadership in the new digital era. In this interview, Viljakainen also shares some thoughts about entrepreneurship and globalization.

This is Part I of the interview.

What prompted you to write this book about leadership and the new digital generation?

Viljakainen: I started my business as an entrepreneur 25 years ago when I was 13, in a corner of our (family) barn. After 25 years, when I kind of retired last October Tieto Corporation was about 18,700 people, of which 8,700 was in other countries. I wanted to crystallize what I have learned about leadership over the years.

When I was a young entrepreneur, my leadership style was developing. It was ok when I was managing 10, 20, 40 people. In fact, when I reached the level of managing 100, 150 people and the business was moving – I was considered a (leadership) hero. Our company used a complex system to measure leadership and my leadership index was 93 of 100, which was like running a religious cult. Life was beautiful.

But when I came into an international environment and I managed 500, 800 and 1000 people in 2003, however, it was a sad year. My leadership index dropped to 27. I once said that we would fire leaders whose leadership index scores fell below 25, so it was fortunate that I did not have to fire myself at that point.

That was a shocking moment for me. I hadn’t changed my leadership style, so what went wrong? So the book is a story is not much a story of best practices, but a story about my major fuck-ups and how I survived from those.

In 2004-2005, I found out we were recruiting thousands of people I started to realize that many of these people who are coming in, those born after 1985 – they are behaving differently. They view leadership, value creation and globalization is very different. That’s why we started a very systematic training program for these folks. Thankfully by the time I resigned my leadership index scores were back into the cult levels.

So the idea behind the book was originally a manuscript for the new generation of Digital Cowboys we were looking at recruiting. If they fully agreed with what I said, I know they are just kissing my ass and we don’t want them. If they are totally against it, we definitely don’t want them as well. But if they fall somewhere in the middle and want to have a dialogue, yes we want them.

Other people do call them by other terms, like the Millenials or Generation Y, but I call it the PlayStation generation because the PlayStation is something that top business executives – who can be pretty simple people – can understand. They immediately think of their children and their digital savvy.

The Digital Cowboys are a subset of that generation. But they may not be typically technology people, and certainly are not nerds. The Digital Cowboys are just well-connected, very international. And they are like cowboys who ride alone and give people the illusion that they are ego-centric won’t work as part of a team. But the amazing thing is that if you get inside their brains and get the best Digital Cowboys to work together, they can really make miracles.

Will people of previous generations really have problems with these Digital Cowboys?

You may believe this new generation (of thinking) may not mean much, but imagine if you’re born in ’57 – you’re probably a senior executive and you’re likely to have issues with this. So people like them can either give up and stay where they are, or most likely they have to just tolerate this new generation. But if you’re from the previous generation and try to put more structure and controls – like prohibiting their use of social media, for example – on this new generation, they aren’t going to like it.

So how can leaders identify a Digital Cowboy from the typical member of the PlayStation generation?

You have to put them into actual teams and put them to work under intense pressure.

There was a time we put some new talents into teams and set them to work. After a year, only 21 of these new people were left. And out of those, 5 or 6 of them decided, by themselves, that they cannot operate as Digital Cowboys. Because it is also a personal decision – whether or not you want to play at that level.

So the answer is by testing – leaders have to continually test their talent pool to find them.

And by the way, being a Digital Cowboy doesn’t mean you’re active with your Facebook or Twitter. People get the impression that those who are in social media are Digital Cowboys, but it is not an automatic thing. For example, you have to be connected to people – you should not just like Twitter, instead you should really like people.

My point is not to just be active on social media, but to add value to others. A tweet like “I ate meatballs today” doesn’t add any value.

How can Asian companies adopt what you’re recommending in “No Fear“?

I’m actually flying off to Beijing to launch my book, so this question is particularly relevant.

Asian leadership typically is the “top-down” approach, and “down-to-top” things are generally frowned upon. But the capital of the world is going to be in Asia in the coming years. Also, many Asian businesses are looking to expand overseas into the U.S and into Europe. If you think that expanding into another country simply means buying up another business, you are going to be screwed as it doesn’t work that way. If you don’t show value creation, the best talent in the business you buy over will leave. The Chinese companies, and other Asian companies, know that. But the tricky part is, how do they change?

What I’ve found is that the best way to do this is to put the best young international talents and their superiors – who are probably from an earlier generation – to work on the same business cases. Putting these leaders on the front line is the trick.

You can check out our review of “No Fear: Business Leadership for the Digital Age“ here.