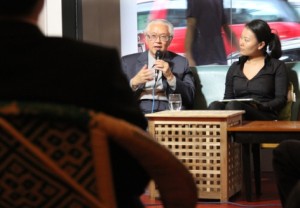 He sat there smiling congenially as questions and comments were thrown at him from the floor, and picked his words carefully before answering. If there was ever a hot seat, this was one – Dr. Tony Tan, previously the  executive director and deputy chairman of the Government of Singapore Investment Corporation (GIC) and chairman of Singapore Press Holdings Limited (SPH) until he announced his running for the upcoming Singapore presidential elections, faced a crowd of over 30 startup founders, entrepreneurs and investor types at the Chillin’ with Singapore Presidential Candidate Dr. Tony Tan session organized by SGEntrepreneurs.com. The open fireside chat session at The Pigeonhole Cafe, and coincidentally enough powered by questions from real-time question-and-answer conference tool Pigeonhole Live (and a Singapore-based startup, to boot), is possibly the first time a presidential hopeful faced off with members of the local startup scene.

The discussions thankfully steered clear of politics and recent controversies but instead focused around the challenges faced by entrepreneurs in Singapore and the role the government can play to spur local entrepreneurship. Unsurprisingly – considering the irreverent and feisty nature of entrepreneurs – the questions and comments from the floor were no-holds-barred, mainly brickbats thrown at the civil service of being “largely clueless” when it comes to supporting entrepreneurship.

A couple of startup founders commented that government grants “pretend to be helpful but actually suck”, to which Dr. Tan – who chaired the National Research Foundation (NRF), an agency which disburses grants for innovation – replied that civil servants aren’t exactly the best when it comes to “picking winners”. Professor Wong Poh Kam of the NUS Entrepreneurship Centre said that there can be too much micromanagement by bureaucrats on entrepreneurship incubators, which tends to then disincentivize them. Tan says that the Ministry of Finance can seem overly bureaucratic as it has the duty to be responsible for taxpayers’ money, but which may not be congruent with the needs of startups. But Dr. Tan explains that the grants are well-intentioned, and that it’s better to try than do nothing at all. He adds that the government works closely with knowledgeable people from the private sector and smart money when coming up with these policies, which can help even the field.

An entrepreneur who hails from the entertainment industry highlighted that there is a big problem with inexperienced policy makers creating guidelines that make little or no sense, which lead to stifling business. “The idea of a bar owner being fined by the police for fights that take place on their premises is akin to a store being fined for someone shoplifting from it,” she bemoaned. “Nightspot owners are now expected to do what the police should be doing, preventing crime.”

The Fight For Talent

There was also the issue of a lack of a sizable talent pool in Singapore, which can severely curtail growth of local business. A technology founder pointed out that it does not help that Singapore’s Economic Development Board (EDB), in encouraging large technology firms to set up shop in Singapore, lead to these companies competing with local firms for limited talent.

Probably the best suggestion of the night came from another founder, who pipped that EDB should actually insist the companies they attract to these shores to “bring their own engineers” along!

The conversation later moved to the Singapore education system and the need to encourage more locals to take up the entrepreneurial path. Entrepreneur Bernard Leong commented that the local interns he’s seen at his mobile location-based ad company Chalkboard seemed to have less of a global mindset than their foreign peers. “They have no idea what they want in life,” Leong sighed.

Dr. Tan agrees that the right education is extremely important to encourage Singaporeans to take the less-beaten path. “We need to get our young people out of the comfort zone,” he said. “(But) the problem of Singaporeans having a well-beaten path made for them can make it difficult for them to do otherwise.” 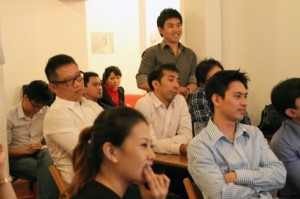 An investor commented that many of them had difficulty attracting investment funding due to the small size of the market, which also limits the support they can extend to startups – a typical vicious cycle. “Scale is a big problem for Singapore,” Dr. Tan agrees, “but it is not impossible.” He points to Israel as an example of a country with a limited population that does have a thriving startup scene.

One question that remains is whether a president with non-executive powers can do anything to make a difference to the local startup scene. Dr. Tan himself openly admits that there’s little influence the president would have on policy-making in this area, so it’s highly likely that nothing much will change. So was this session then in vain?

That remains to be seen.

For a more comprehensive story, check out SGEntrepreneur.com’s event post.