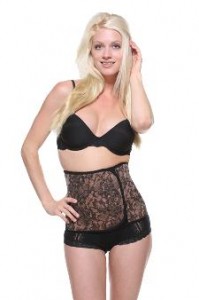 If necessity was the mother of invention, Lori Caden invented something – out of her own need – that most new mothers would thank her for. Lori Caden developed the Belly Bandit, a product that would help new mothers get their pre-baby bellies back quickly after birth.

In 2005, Caden was buying cat food when the store employee offered to help carry her load – a nice gesture for a pregnant woman, except that Caden had already given birth the previous week. Horrified but strangely inspired, she then looked at how she could address this problem which she was sure affected most mothers as well.

Caden then came up with the Belly Bandit, a type of shape-wear that compressed and bound an after-birth belly, with the help of top obstetric gynecologist Dr. Jay Goldberg.

“During pregnancy and delivery, the body produces a hormone called relaxin which causes joints and ligaments to loosen for the baby’s arrival,” explains Goldberg. “For the first six to eight weeks post-delivery, these hormones stay in the body making it an opportune time to take advantage of relaxing and use compression binding to reshape and shrink the stomach, hips and waist,” says Goldberg. Caden first tested it on herself after she gave birth to her son Chase.

“In just three days after giving birth, my stomach was noticeably flatter! Within six weeks I was back down to my pre-pregnancy size,” Caden declares. “It was a staggering difference from the eight months it took me the first time around with my daughter Charlee!” Caden then knew she had a product all her pregnant friends would want. On Mother’s Day of 2008, Los Angeles, California-based Belly Bandit was born.

Caden wasn’t wrong. The company was in the black after just one quarter of sales. The Belly Bandit also attracted the attention of then pregnant star, Kourtney Kardashian. A partnership was formed, and the first Limited Edition Belly Bandit was developed. “When I got pregnant, one of the first things my friends with kids told me was “buy a Belly Bandit!” Kardashian says. “I was thrilled to get to design my own.” Building on her success, Caden began expanding her product line – there came a compression tank, along nursing tanks, pants and more Belly Bandit styles.