We’re all pretty familiar with the popularity of surfing, but not many of us know that there are many different types of surfing – aside from surfboarding, there are derivatives like kite-surfing and wind-surfing, for example. There’s also a less commonly known one – bodysurfing, where the surfer rides a wave without relying on any bouyant device aside from specialized “swimfins”.

But what many won’t know is that the art of bodysurfing goes back to the days of Captain Cook, who was credited with initiating the sport while exploring Tahiti in 1769. Today, the sport is popular as ever, and Slyde Handboards intend to ride that wave and shred a whole new destiny.

Venice, California-based Slyde Handboards is a small company founded in 2010 that aims to create an entirely new innovative and design driven brand and subculture centered around the sport of handboarding or bodysurfing. “Remember the days as a kid on the beach ‘borrowing’ fast food restaurant food trays to catch the shore break at your local break? Well we did!” says Steve Watts, founder and creative director of Slyde Handboards. “And this is the inspiration behind creating a line of handboards that are shaped and designed to shred and also create a strong brand exclusively for handboarding.”

Watts grew up surfing the beaches of Durban’s Snake Park Pier, the breeding ground for some of the world’s great surfers, including Shaun Thompson and Jordy Smith. It was there on the shores of the South African coast that the initial idea for Slyde was formed. He has also traveled extensively for over eight years to many of the great surf destinations of the world, such as the outer islands of Indonesia, both East and West coasts of Australia and New Zealand, and that in-depth immersion into the surfer culture has translated into what Slyde Handboards is today.

“The inspiration for the arrow in our logo is a turn-off sign you see along the N2 coastal highway in South Africa that has breaks like J-bay along it,” adds Watts. “Nine times out of ten that sign means good surf!” 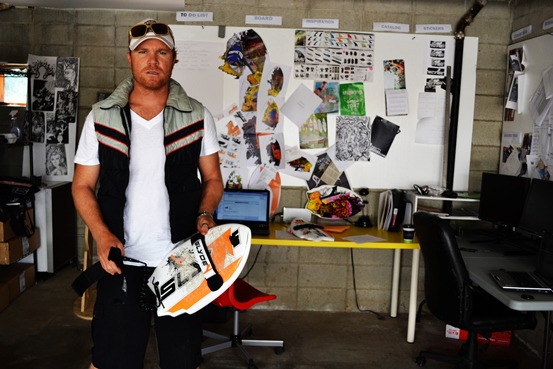