If you think seeking funds is the toughest – and most important – part about founding your own startup, you’re likely to be wrong there. The folks over at Founder2be (www.founder2be.com) believe that finding the right co-founders for your fledgling company is actually the most difficult yet crucial in determining the ultimate success of your venture. That’s why they came up with their online community of entrepreneurial-minded people.

Founded by Germans Oliver Bremer and Frank Haubenschild (both 35 years old), Founder2be is a platform that connects people in the entrepreneurial space – designers, programmers, marketers, for example – together. You can search for potential co-founders by country and skills, post and comment on ideas, and connect with like-minded people.

The idea for Founder2be was inspired by an experience Bremer had – after some 10 years in the corporate world, he had an idea he wanted to come out as an entrepreneur to work on. But he had tremendous difficulty finding the right co-founder and finally gave up on his idea. The failure did get him thinking, and the seed for Founder2be was planted. Bremer then quit his job at the end of 2010 and worked full-time on his startup (while based in Finland). Haubenschild, Founder2be‘s developer, works out of Germany. 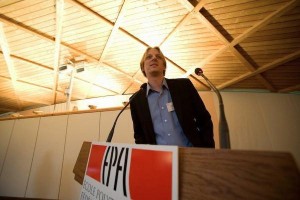 “Most people would think that the main obstacle when launching a start-up is money… (but) probably the biggest challenge is to find is a co-founder,” Bremer says. “If you have a great idea, there will be people to invest but in order to be able to persuade them that your idea is worth something you have to be able to implement it and it is somewhat difficult to do on your own.” Bremer says that nine times out of ten co-founders are looking for developers because no matter how great your project is in theory – you “need someone to actually make it work”.

“There are quite a few challenges of finding a suitable co-founder and Founder2be is trying to solve at least some of them,” he adds.