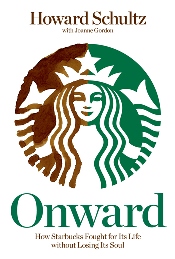 On February 26, 2008, customers at 7,10o Starbucks stores in the US were asked to leave. The reason? So that the company could retrain all its baristas to make the perfect espresso – something CEO Howard Schultz admitted in his book, “Onward: How Starbucks Fought for Its Life without Losing Its Soul“, that the company had not paid enough attention to in its relentless, if misguided, pursuit for growth in the middle of last decade. But this was but one painful step amongst many that Schultz had to take his company through, and “Onward” brings us through the eyes and mind of Schultz as he navigates the iconic coffee company through its difficult times and later revival.

The book is a wonderful story about the origins of the company, its ensuing growth and its drive towards constant reinvention. “Onward” – the word was used by Schultz to sign off in his first memo in 1986 to the staff of his fledgling coffee retail store Il Giornale in Seattle’s Columbia Center; the title of the book now describes Schultz’s vision and drive towards making Starbucks the best known coffee brand in the world. You can literally read the man’s passion for coffee and the company he’s lovingly built over the years as you pan through its pages.

“Onward” is also a cautionary tale for companies who run the dangers of pandering to Wall Street, instead of keeping the company focused on real, sustainable growth. You’ll read about how the smell of cheese in Starbucks outlets – the smell of burning cheese, to be exact – drove Schultz mad with despair and would be one of the factors that would lead the company into an upheaval. Or how he’d talk the company through its own version of a burning platform. His vivid descriptions of the painful decisions he’d had made – firing of key executives, restructuring of operations, for example – makes for compelling reading, and gives you great insight into the mind of one of this decade’s most successful business leaders.

There’s really a little bit of everything for the reader. If you’re a marketer, Schultz describes how Starbucks would market its Pike Place Roast, introduced during a soft economy. For those of us who are more social media inclined, Schultz reveals in the book how MyStarbucksIdeas.com came about from a discussion with Michael Dell – inspired by Dell’s own IdeaStorm.com – and shaped along by folks from Salesforce.com. And if you’re a founder and entrepreneur of any sort, you’ll easily pick up some great business and leadership lessons from Schultz worth applying to your own situation.

Highly recommended. Oh, and do read this with a good cup of coffee.