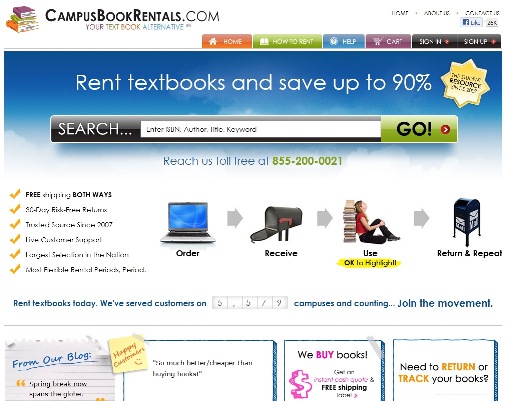 CampusBookRentals.com is a U.S.-based website that it offers textbooks for rent. The site also buys books from cash-strapped students who don’t require those textbooks anymore. It’s a very simple business proposition, but this helps many thousands of students across 5,600 college campuses each semester to save quite a bit of money.

Students simply register online and search for a textbook by ISBN number, title, author or keyword, and select an appropriate rental period (semester, quarter, summer, etc.). There’s free shipping too. For every book rented, CampusBookRentals.com donates a portion of its proceeds to a worthy humanitarian project each year, such as Operation Smile, which is dedicated to providing cleft lip correction surgeries for children.

Co-founder Alan Martin says he was inspired to start CampusBookRentals.com as a college student who was frustrated by the prices of textbooks, to the point he was “almost unwilling at any level to even enter the doors of the bookstore”. “In the summer of 2007, I was in my master’s program and was actually in the process of buying a book online. It dawned on me that I had been buying and selling books online for five years (my entire college career), and felt I had the process down pretty solid,” remembers Martin. He then figured that, if he could buy and sell online, but get a rental fee for the book between those two exercises, he could maybe make some money.

“I just knew there had to be a better way to distribute textbooks. When I considered a rental model, it just clicked.”

But Martin knew the idea wouldn’t work on just one university. He then piloted the concept at Weber State University in the summer of 2007. With its savings of 50 percent or more on textbooks, the idea took off amongst cash-strapped students. Enough people liked the concept that Martin decided to quit his job to go for it – he even dropped out of my master’s program with two classes left.

Since then, his startup had grown at an impressive pace. “Starting in my basement in 2007, we then moved into my garage as the demand for book rentals grew. In 2009, we moved into our first warehouse. We’re now in our fourth space in two years,” Martin says, attributing CampusBookRentals.com’s phenomenal growth to timing, finding a previously non-existent niche market, and a talented team. Today, CampusBookRentals.com now employs 83 people, up from 35 last August.

“Only a year after we formed the company the economy became unstable, causing many working professionals to go back to school. Presenting these students with the option to rent their books and save significant money found great appeal,” Martin adds. “In addition, because of companies like Netflix, the idea of renting through the Internet had become commonplace.”

Martin says the textbook industry is very nuanced; its players are mostly old and interconnected in some way. “We learn new things  all the time about the inner workings of the textbook and higher ed industry, Martin reveals. “We came in literally off the street to compete in a space that is old but strong and fairly wise.  It is challenging to come into a space that very few people have actually successfully contested in the past.” But Martin says that their interactions with industry experts and suppliers has led us to great relationships and an ever increasing knowledge of the industry and has allowed them to compete successfully.

Lessons From A Book Industry

Martin isn’t too worried about the digitization of content, especially with textbooks, but it’s something the team watches very closely and hopes to participate in when the time is right.  “Sentiment around CampusBookRentals.com is extremely positive because we are delivering what students want and need in the right format and for the right price,” Martin says. “As students needs change, we’ll continue to serve them and meet those needs. That may be in the form of digital content at some point in the future.”

The entrepreneur’s learned many lessons over the past four years running CampusBookRentals.com. “It takes a tremendous amount of energy, both mental and physical, to grow a business,” warns Martin. “Once launched, there’s no option but to see it through (unless you like to fail I guess), and it takes dedication at a level I really love, but hadn’t contemplated.”

“Secondly, it takes capital. More capital than most reasonable people would believe to pull off major growth.” Raising capital, he adds, took up most of his time for the first 3 years.  Finally, he says it’s critical to surround yourself with people that fill your intellectual gaps. “It doesn’t take long before a business outgrows its founders’ ability to manage all aspects and navigate through all challenges and decision points. Having awesome people and the combined intellectual capacity of a great team is absolutely key to success.”

It’s All Or Nothing 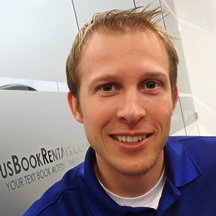 Martin says that if he knew back in 2007 that he’d be launching a business on the eve of the biggest financial crisis of the last generation, he’s sure he wouldn’t have done it. “It was somewhat serendipitous that it worked out in our favor,” Alan muses. “But that is the hand you play as an entrepreneur. There are absolutely no guarantees, but in retrospect, that’s what makes it what it is.” But now, he’s convinced he has a crush on entrepreneurship.

He’s also a strong believer in hard work. “I am convinced after watching CampusBookRentals.com grow over the last four years now, that a lack of experience can be made up in hard work,” Martin asserts. “As long as you haven’t been unrealistic in believing you have a good idea (that just simply isn’t), input will at some point create output.”A good personal example was the first nine days of January 2011, when they did more business than our first entire two years, in which he attributes to relentless work and preparation.  “Work, work, and work,” he stresses.

His advice to aspiring entrepreneurs? “If you’re serious about launching something, at the minimum pull a double all-nighter and then dive into something analytical, or solve a real problem.” That’s because, Martin says, this will absolutely happen on more than one occasion when you’re starting out. “You have to have the capacity to pull those type of things off. And those moments I really believe ultimately can define a company.”

Another piece of advice is a financial one – contemplate maxing out every single credit card and draining your bank account and see how that settles in your mind and stomach. “I gave every dime to CampusBookRentals.com, and applied for and then maxed every single credit card I could get my hands on (15, yep, fifteen credit cards). Those cards stayed maxed out for three years.”

“That meant driving my same old car. Zero upgrades to the house. Very little travel, vacations, and the like. And I now can’t even buy a hot dog on credit,” he laughs. “Those are the types of risks you may have to take. And if failure isn’t an option, you need to prepare to live with what comes with those risks.”

The final piece of advice? “Don’t let ego or pride get in the way of the right decisions. Listen to people smarter than you. Acknowledge and embrace your intellectual gaps, and find great people or mentors to fill them.”

“There is no scenario where you do something alone, so partner well.”