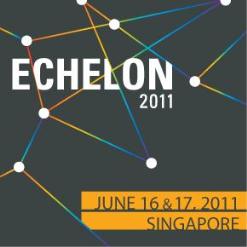 Echelon, Southeast Asia’s biggest conference for technology startups, is back for its 2011 edition and looks to be even more exciting than before.

Previously known as UnConference Singapore (in 2007-2009), Echelon has been primarily responsible, over the past few years, for unearthing some of Singapore’s and the region’s most promising technology startup companies. Many of these startups have all gone and made their mark – there’s Gothere.sg and Phlook from 2008, startups from 2009 such as SocialWok, those from 2010 such as Foound, FlutterScape, pepperconn and Insync – or died horrible, ignoble deaths…

In any case, if you want to see the region’s best new companies present their products live, or hear from distinguished global speakers like Derek Sivers of CD Baby), Jason Wishnow of TEDtalks, Facebook co-founder Eduardo Severin and Uservoice‘s Richard White, this event is the place. You’ll also get to meet around a thousand of the region’s venture and angel investors, entrepreneurs, developers and regulators in the web and mobile technology spaces.

Thanks to organizers e27, up to 25 readers of this site will also get a promotional ticket price – SGD120 instead of SGD250 – if you sign up before May 31. Just use the promo code YOUNG (not case sensitive) when signing up (choose Regular Ticket >> enter promo code on bottom left >> click Register Now).

Young Upstarts is a media partner of e27 and Echelon 2011.