SpeechTrans (www.speechtrans.com) is an automatic speech recognition and translation mobile application available for iOS devices, as well as Android devices (such as the HTC Amaze camera phone), essentially turning your device into a professional voice translator. All you need to do is speak into your mobile device, and the software will translate your words into another language. Yes, if you’ve ever been in a foreign country and have struggled to communicate with a local, you know just how useful this is.

John Frei, co-founder of SpeechTrans, came up with the application when his younger brother’s fiancée struggled to learn Swiss-German, spending a few hundred dollars on language learning software to prepare herself for a trip to Switzerland. He remembered how difficult it was dealing with a language barrier and the frustration of learning a new language. Frei thought – why not have software that allows you to speak in your native language and translate it for you? In March 2010, he partnered with co-founder and CTO Yan Auerbach, an IT executive with experience in multiple industries, and the development of the SpeechTrans technology took shape. When it launched in October of 2010 on Apple’s App Store, SpeechTrans garnered more than 10,000 downloads, was the No.3 downloaded travel app in the U.S. by the third week of launch and amongst the top ten travel apps in dozens of countries around the world.

SpeechTrans’ Automatic Speech Recognition (ASR) technology is powered by Nuance Communications, Inc. “By partnering with Nuance, we assure that our translations lead the market in terms of accuracy and speed,” says Frei. “Furthermore, we can continually add more languages to our SpeechTrans service as Nuance rolls out more language capabilities over time.” The subscription-based translation service is currently enabled on nine different languages, including U.S. English, UK English, German, French, Spanish, Italian, Polish, Russian, and Portuguese. There are 17 apps currently available that provide for uni and bi-directional translation between the available languages. In addition to the subscription version, a free version of the app called SpeechTrans Lite is also available. It includes ten free speech recognition translations as well as unlimited text to speech translations. 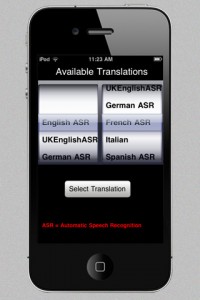 It also has SpeechTrans Ultimate, which bundles a sizable number languages and translation services into one single app, with the ability to quickly toggle between multiple languages. It has a massive library of around 300,000 words and phrases per language, which helps it achieve around 90-percent accuracy in translation. Its most interesting function is perhaps its Facebook Chat integration, so if you use chat through Facebook with people in other languages this may be useful to you. “Our Facebook integration is like having an interpreter available for conversations across the globe,” says Frei. “SpeechTrans enables real two-way conversations and bridges the language barrier that prevents true global discourse.” There’s text-to-text translation through Google Translate.

Aside from targeting the consumer space, SpeechTrans is also looking in the business enterprise space – they are looking to position the translation service as a solution for businesses that are looking to expand overseas, or simply have better communication with their existing clients and personnel worldwide.  The company is also currently pursuing public military contracts under the DARPA BOLT (Broad Operational Language Translation) Program.

“Entrepreneurs are the driving force to help stabilize the current economic crisis,” says Frei, who previously founded and sold a construction company prior to starting SpeechTrans. “Small businesses help create new jobs and innovation that will lead the world out of the recession.” He points out an interesting statistic that most Eentrepreneurs fail 16 times before being successful.  “My advice to startup entrepreneurs is making your mistakes as quickly and cheaply as possible and learning from those mistakes.”

“Anyone can come up with an idea, but it’s how you execute that idea that will determine your success.”

(such as the HTC Amaze camera phone)