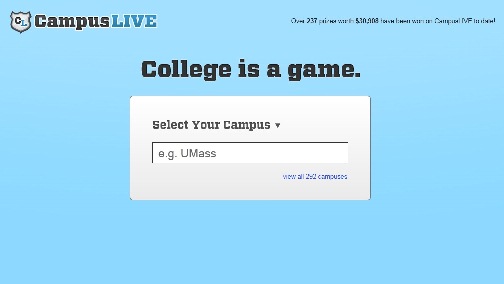 CampusLIVE (www.CampusLIVE.com) is a social gaming platform that enables college students to connect with brands through casual, easy-to-play games such as polls, surveys, scavenger hunts, team matches and such. The funded startup works to create “engagement campaigns” with various brands and sponsors to offer students the opportunity to win prizes, discounts and other incentives in exchange for playing those social games.

Boston-based CampusLIVE was born out of a University of Massachusetts dorm room back in 2008 by Boris Revsin and Jared Stenquist as a way to connect students to on and off campus resources such as local restaurants, businesses and off campus events that often go unnoticed by students in their first years of school. Its full suite of student tools – full Facebook integration, campus maps (proprietary mapping similar to Google maps), TV guides, class rosters, schedule management, and even a list of take-out places around each school – pretty much provided all that a student would need during college. Not surprisingly, CampusLIVE its growth was phenomenal – from one campus and an annual revenue of US$125,000 in 2008, it’s grown to 292 college campuses nationwide. In 2010, its revenue was US$500,000.

Where does this money come from? What few realized was that the approximately 18.5 million undergraduate college students at over 4,000 colleges and universities in the United States translated to  over US$330 billion dollars in total spending power, and over $69 billion in discretionary income. The founders of CampusLIVE realized that with such spending power, advertisers would view the collegiate marketing as a valuable, expanding and life‐long marketing opportunity. What was needed, the knew, was a way where students can interact with major brands.

The Answer Is Social Media

They found the answer in social media.

CampusLIVE created a simple interaction platform known as “Challenges” that helped to drive social media awareness towards a specific brand. These challenges, which are paid for the brand, include surveys, ‘Likes’ on Facebook and even photo submissions to that brand. For this, brands would pay CampusLIVE for a specific number of students to complete these challenges. For example, a recent partnership with Foxwoods Resort and Casino, North America’s largest resort casino, saw 1,000 students as part of their loyalty program to like them on Facebook and complete a survey. CampusLIVE then created a challenge for Foxwoods to give away a grand prize, in this case the grand prize was an overnight stay and dinner for two at Foxwoods’ Ceder Steakhouse. In another example, the platform helped sell 1,200 pre-sale tickets to a concert in less than 24 hours.

It’s the classic win-win situation – the brand gets awareness and buzz, students get special treatment and incentives and a chance to win a grand prize, and CampusLIVE walks away with a viable business model. Over the last year, it’s been able to attract partners such as Foxwoods, Hotel Planner.com, Ace Ticket, Peter Pan Bus Lines, G-Shock and Flashbuy. 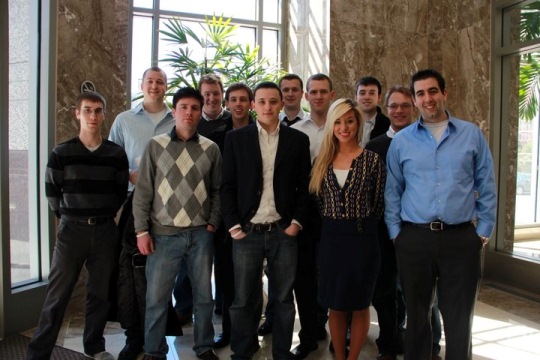 Boris Revsin, CampusLIVE‘s CEO, credits their growth to the company’s clear-cut plan for the young but flourishing digital media company. “In my mind the most successful businesses aren’t the ones that get a million users first, then focus on the money,” says Revsin. “With a company like ours we are going to be judged by our cash flow, and if I can successfully turn our users into revenue then we win.”

“Cash is king,” insists Revsin, 24, who was born in Russia but moved to the United States as ‘Jewish refugees’ in 1990 when he was just four. “For some time, you can live off of ramen and sleep in the office, but starving your business is not always the best way to go.”  He says the biggest challenge he’s faced is often mental – sacrificing equity in the company, relationships and a whole lot more. “It’s important to maintain balance and that is something you have to actively work towards every day. The only way to overcome the mental challenge is to put together a crew of loyal team members and advisers. There is no other way.”

But he’s really enjoyed the business side of entrepreneurship – working out a product launch, making the sale, getting a repeat sale, for example. “Now, I’m focused on scaling so the next highlight will be CampusLIVE as the thought leaders in our business of engagement marketing.” His biggest regret? “Not focusing enough on the foundation of the company – the legal, incorporation, etc. That stuff only matters if you’re successful – but boy does it matter.”

“Get a professional to do it right.”