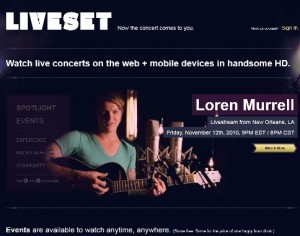 You love music, in fact you love live music. But attending live concerts can be draining on the wallet, and sometimes your favorite music artiste seems determined not to put your little town on the prairie on their concert route. Cue Liveset (Liveset.com), a New Orleans-based live music and video streaming service that is a new and affordable way for music lovers to see their favorite bands perform live.

On March 23, Liveset released an hour-long set of American indie rock and folk singer Ben Kweller’s performance from the Ogden Theatre in Denver, which was filmed on February 17 in front of a live audience and streamed live via Liveset for fans to watch at home.

“Liveset is an innovative, cost-effective way for fans to see beautiful live performances from the comfort of their own home or their mobile device,” says Liveset founder Ross Hinkle. “To see an artist like Ben Kweller is only US$6.99 – that’s less than the price of a happy hour cocktail in New York – and the quality is outstanding. ” Ben Kweller’s concert will be the first of many archived concerts fans are able to access on Liveset. To date, musicians have included Theresa Andersson, John Michael Rouchell, The Wellspring, Andrew Duhon, Sun Hotel, Loren Murrell, The Magnolia Beacon, The Craft Brothers + Alexis Marceaux, Mark Adam Miller and spoken word artist Kataalyst Alcindor.

The service also allows fans to learn more about the personal lives of their favorite singer or band through intimate, behind-the-scenes clips of them in everyday situations. 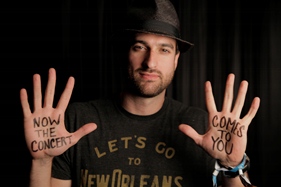