Sometimes – just sometimes – startups don’t come up with a serious service or application. In fact, some of them are simple, plain fun. Here’s a cute one that challenges you to think about stupidity – SoStupid (www.SoStupid.com).

If you’ve ever come across something so incredibly stupid that you just wanted to let everyone know about it, well, now you can. Jericho, New York-based SoStupid gives everyone an online place to point out whatever they think is “stupid”. Launched in end-March, people can get on the site to find out what others think is stupid, as well as sign up to leave their own “this is stupid” inputs.

Of course, you can use Facebook or Twitter to announce your “this is stupid” views, but there’s nothing like an entire site full of consolidated stupidity. 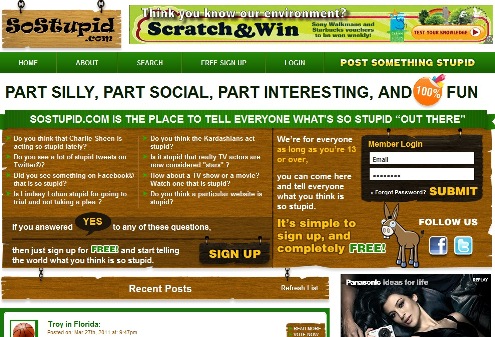 The founders of the site says that although the site is meant to be fun, they do draw the line at hateful speech or online bullying. “You have to be 13 to register, and the site will not allow “stupid” postings for non-public figures. So, you can’t say your classmate was stupid, as that’s not really what the site is after. It’s more of a pop culture, observational thing. Which leaves, oh, maybe 100 million stupid things to write about.”