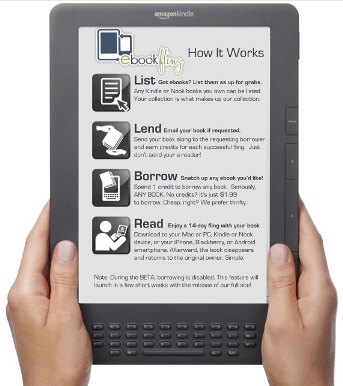 You’d think the book publishing industry has had enough problems over the past few years. The industry’s total annual revenue fall from around US$40 billion in 2008 to around US$27 billion in 2009, no thanks to a double whammy of declining book sales in a less than vibrant economy, and the fact that it’s still struggling with the new digital economy.

There’s no doubt e-book consumption is on the rise – Forrester indicates that the e-book market size in 2010 was almost US$1 billion, with some 15 million consumers owning e-reading devices. And the market size is likely to triple to around US$2.8 billion by the end of this year as well.

And then consider another possible disruption to the industry: peer-to-peer e-book lending. Not only has Amazon recently enabled book lending for the Kindle, now there’s eBookFling (www.ebookfling.com), a startup that creates a virtual “e-book swap” that facilitates the direct lending of e-books between consumers using the lending features enabled by the Kindle and Barnes & Noble Nook.

The idea for eBookFling is quite simple and uses a credit system as currency: users who list their books in the system earn one credit for every five books, and one credit for every each book successfully lent. A lender gets notified whenever someone wants to borrow their book, and has a set time to complete the transaction through Amazon.com or BarnesAndNoble.com with eBookFling verifying the transaction. When the borrower downloads the book (which is available for use for 14 days), one credit is deducted from their account. The question is – will this break the industry, or will the try-before-you-buy system help spur book sales?

“One of the biggest questions any reader has is ‘what to read next?'”, says George Burke, CEO and founder of eBookFling. “Book discovery is extremely important to the publishing industry and one of the recent ways they’ve enabled discovery of new books for readers is through ebook lending… just like the good old days, swapping books with friends — only digital.”

Burke argues that the trouble is that even within friends – or book clubs – the number of books that you can borrow from is still quite limited. And this is where a digital swap like eBookFling comprising of thousands of users come in. “Those who were not willing to risk the expense of trying an author for the first time can use eBookFling to find the book they want to try and request it to be lent.  The author gets a type of exposure that was never possible previously,” Burke adds.

He explains that the intent of lending is to expose a reader to an author they’ve never previously read. In any case, these days publishers also tend to provide a free title (usually  from an author as a promotional tool to gain readers – take Harper Collin’s experiment with Neil Gaiman, for example. “I would think lending would be a less-risky method of promotion,” Burke muses. Burke comes from a background of running BookSwim (www.bookswim.com) , a ‘Netflix for books’ of sorts. BookSwim struggled for some time to figure out a way to translate its physical book rental-by-mail service into a digital e-book model, but fought an uphill battle trying to obtain licensing. When Amazon and Barnes and Noble started to allow book lending, he realized the time was ripe for something like eBookFling.

“(It’s) such an intriguing business model for me because there’s no inventory to purchase; no packages to ship; no expensive warehousing needed – just readers who love to share,” says Burke.

eBookFling is Burke’s third startup since he’s been in college, because he says he’s always “dreaded the concept of a job”. “Little did I know that I’d work way more than those who did hold a ‘job'”, Burke laughs. “I thought I was escaping work.  Turns out I found a labor of love instead.”

He does have a word of advice for aspiring entrepreneurs, and that is to follow what sports apparel brand Nike expounds. “Just do it,” Burke declares. “So many times I would have talked myself out of the ridiculous concept of charging to rent books when libraries loan them for free.”

“I’ve had to go with my gut instinct, believing the public does want this, knowing that the controversy would fuel the buzz, and devote my energy to getting the damn thing up and running.”