Have you ever felt overwhelmed by social media? It’s starting to a huge problem, and there are some startups that think there’s an opportunity in helping people deal with social media overload. Take Boston, Massachusetts-based Eegoes (www.eegoes.com), for example. “The problem with most social networking sites is that there’s just so much to digest. Between learning how each platform works and slogging through hundreds of status updates about your friends’ online gaming milestones and their daily horoscope, it’s easy to get overwhelmed,” says Guillaume Molter, its CEO and co-founder.

His service, Eegoes, is positioned as a “new-generation” social networking site, one that aims to provide a more user-friendly and more streamlined platform for social interaction. The service is based around user interests (structured into categorized networks such as Travel, Sports or Music), allowing them to connect with people who share these interests, powered by the latest web technologies such as real-time content, geo-location etc. Within these networks, users can create their own ‘Groups’ to host discussions. Users can also filter their content through keyword settings to deliver only the most relevant of information most relevant to their interests. For example, users can setup keyword filters that dictate the system will only present tweets from Twitter users they are following that contain certain keywords. If you’re a Tumblr user, for example, you can set up Eegoes to promote your Tumblr posts as well as find some other Tumblr posts talking about your interests. 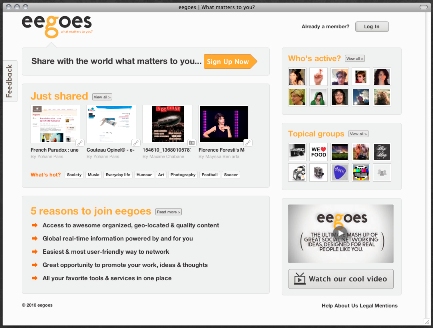 Hence, users can share and access filtered, organized and qualified content in a more efficient way. “Eegoes cuts through the clutter by simplifying and organizing the content you really want to see and making it easy to share what’s really important,” says Molter. But if you prefer complexity, the service allows you to hook up and integrate seamlessly with other networks, and is available on any mobile device.

Molter says they were inspired to create a new social network to tackle the flaws they perceived in existing ones. “Each of us are using several services on a daily basis, and we can all agree that these social networking tools were not perfect  and that something was missing,” explains Molter. An example – in existing networks, it’s easy to access real-time information, but not quite so easy trying to pull out older content posted some time ago. He adds that they were getting a lot of feedback from people who didn’t understand the point of tools like Twitter, or how Facebook is great but largely limited to friends and family.

Molter, who has a background in software development and information technology, started Eegoes after spending some months in Boston visiting relatives, during which time he did some market research in this space. Eegoes is currently still in beta – for now users can only only push what they post on Eegoes to Facebook and Twitter. Molter adds that their engineers are currently hard at work on features to help import content from other social identities and filtering it to help users only see status updates, videos, and posts that interest them.