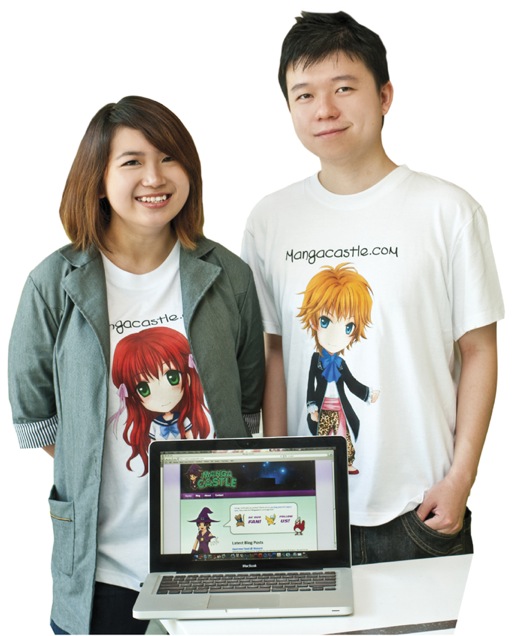 To most of us, watching anime or reading manga is just a past time, and beyond dressing up in our favourite character’s costumes, and collecting memorabilia, there really isn’t much else to do.

But Sylvia Yao and Wu Di, both manga fanatics and gaming enthusiasts, decided they had to do something manga-related to fill the void that the growing social gaming scene had left behind. Observing the growing interest in manga here in Singapore, and the many social games that have sprouted over the internet, especially social media platforms, it was only natural the duo felt marrying the two would then give manga fans access to a wide array of manga-styled games to add depth to their hobbies.

Manga Castle was finally born in January 2010, and so well-received by manga fans all over Asia, the US, Canada and the UK, it already has a growing community of more than 17,000 fans on its Facebook page. A feat that was made possible by their participation in various business competitions, most notably, the Ideas.Inc Challenge 2009, where they received $15,000 in prize money, another $100,000 through the competition’s Top Incubation Award, and mentorship and entrepreneurship training on top of that.

The seed money has allowed them to be able to hire a team of graphic designers and programmers, and they now have the capability to constantly improve their gaming engine for a more enriching experience for gamers.

What was originally a consumer-driven, subscription-based gaming portal, has also since evolved to become a platform that also attracts gaming developers to showcase their games. Manga Castle provides these gaming developers with the business intelligence they have gathered, through the gamers’ behaviours online, to ensure gaming developers are able to develop games that are now based on facts and science, instead of intuition that they’re traditionally used to. This then ensures developers build games that are profitable and have business sustainability.

With this business concept, Manga Castle expects to build an all-rounded manga community that is well-connected from gamer to developer, although business ideas continue to evolve with time and the needs of the community.

However, passion is the only constant in this journey. As Sylvia puts it, “Only when you are passionate about what you do, can you persuade others to buy in to your idea. Although we are still in the middle of this journey, our vision remains steadfast and I am still in awe of this journey of self-discovery.”

Your passion can materialise into a successful business idea, if you do something about it! Execute it now by taking part in ideas.Inc. Business Challenge, an annual business competition organised by the Nanyang Technopreneurship Center for aspiring entrepreneurs aged 26 years of age and below. ideas.Inc. Business Challenge provides significant funding, mentorship and skills enhancement workshops for its successful participants. Registration for the competition closes 7 February 2011. More details can be found here at www.ntu.edu.sg/ideasinc

You can read a previous interview with Manga Castle on Young Upstarts here.

Ideas.Inc. Business Challenge 2010 is an advertising partner of Young Upstarts.