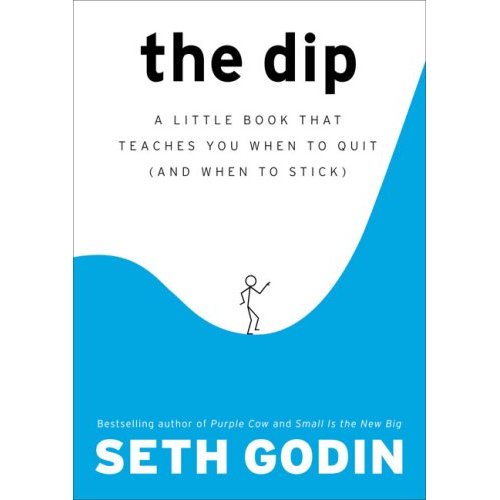 Seth Godin‘s book The Dip is not a new book (it was released in 2007), but I’ve only recently picked it up despite being a huge fan of the marketing guru and prolific author.

Whether you’re running a struggling business, trying to resuscitate a dying brand, or simply stuck in a dead-end job or a bad relationship, Godin asks you a most pertinent question in his book: are you in a dip, a cul-de-sac or a dead-end? Essentially, he’s asking if you can see light at the end of the tunnel.

Average Is For Losers

Whether you’re an entrepreneur or professional, Godin makes it pretty clear – either be exceptional in your field, or quit. “Being average is for losers”, he writes. It’s a similar sentiment echoed by inspirational speaker and entrepreneur James Sun.

Godin makes it clear that quitting is not a bad thing, that smart quitters know it’s about opportunity cost. Here’s what he says:

What a spectacularly piece of bad advice.

Actually, quitting as a short-term strategy is a bad idea. Quitting for the long term is an excellent idea.

I think the advice-giver meant to say, “Never quit something with great long-term potential just because you can’t deal with the stress of the moment.” Now that’s good advice.

I must say – I’ve picked this book up at exactly the right time. As far as a book goes, it’s pretty thin – you can easily finish it on a short-haul flight. But despite its size, it’s made me think long and hard about my own life a couple of months back. And today, I’ve gotten out of that dip.

If you’re stuck in a dip, perhaps the book will speak to you as it had to me.