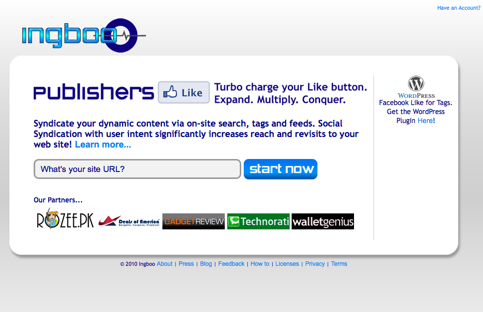 Sunnyvale, California-based startup IngBoo (www.ingboo.com) aims to change social sharing as we know it. Its idea revolves around social plugins that allows web publishers to syndicate, connect and share content, based on trusted recommendations, via search, tags and feeds.

We know that Facebook has achieved widespread adoption of their social plugins, most notably its Like button. But what if you can do even more with it? IngBoo thinks it has the answer. IngBoo personalizes the “Like” connections on your site – which is also integrated with Facebook Like – so that visitors who click on them can get relevant and ongoing updates through email notifications, Twitter updates or on their Facebook news feed any time the you post a new article in the same category, tags, topics or keywords. For example, when someone reads a post you just wrote about, say, the new Google Nexus S, and clicks on the “Like” button, then the person will automaticaly be notified when future content on a similar topic – Android, Google, mobile phone, for example – is added. This way, relevant content is pushed to visitors, while your site gets additional traffic. So now, your “Like” becomes even more powerful than it already is – a “Like” button on crack, if you will.

IngBoo is founded by Rikard Kjellberg and Furkan Khan in 2008. Rikard, who serves as IngBoo‘s CEO, has held several leading positions in the communications and Internet industries over the past 20 years, including stints at Ellipsus Systems (acquired by Openwave Systems), Venturi Wireless and SAAB TransponderTech. COO Furkan was a founding member of NetMind Inc, and served in companies such as PUMATECH, VeriSign, Openwave, Schlumberger Technologies and Computer Associates.

IngBoo launched their beta service in May last year, but recently introduced this feature to WordPress users as a wordpress plugin earlier this year – a good move, considering that WordPress arguably commands some 40% marketshare for hosted blogs. “Expanding Facebook Like for Feeds to publishers beyond WordPress (was) an important milestone for us,” says IngBoo‘s co-founder Furkan Khan. “Now more than two million existing Facebook Like partners can benefit from this dynamic engagement tool and expand their fan base.” To date, 4,500 publishers have signed up for its service.

Just this week, IngBoo announced that co-founder of Sun Microsystems (now part of Oracle), Scott McNealy, will serve as an advisor to the company’s founders. McNealy happens to be the visionary behind Curriki.org – a social network for educators who wish to develop, collaborate and share world-class tutorial resources – and his experience is certain to boost the team’s credentials.

“The explosive growth of the Social Web creates tremendous opportunities for young startups,” says Scott McNealy, “IngBoo has a talented team with a vision to transform social syndication to a more relevant engagement model that benefits both publishers and consumers support IngBoo and its mission.”