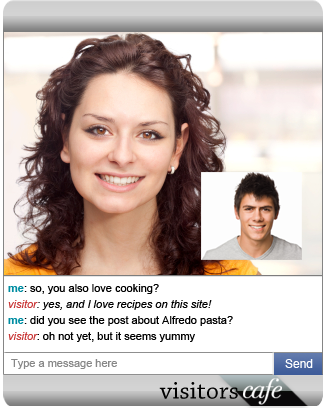 VisitorsCafe (www.visitorscafe.com) is a web feature that enables visitors coming on a given website to talk to each other via video chat, which lets site owners to “socialize” their community – thereby making more money since visitors spend more time on the site. Think of it as a targeted Chat Roulette enabled on any website.

Launched on November 10, the Boston-based, Harvard Business School-funded startup that developed the service makes use of a patented technology that matches site visitors based on demographics and interests – spanning gender, age, country, education, work experience and the like – which supposedly “increases the likelihood that users will engage in meaningful conversations and connections”.  Its pro version can integrate data from a site owner’s own user base to match them accordingly.

“Nowadays, almost every device comes equipped with a webcam – and the ongoing human desire to find people who match your personal profile and socialize with them,” says VisitorsCafe CEO Morgan Hermand-Waiche, who adds that the inspiration behind VisitorsCafe is really ‘technological evolution’. “And what is the most common and widespread ground for socialization today? The internet, which encloses countless communities of like-minded people who are eager to share and interact with each other.” He says their video chat feature is easily integrated on any site, and “anyone could put this feature on their site in less than a few seconds”.

According to Morgan, VisitorsCafe is suitable for targets all site owners – community news, fan sites etc. – and bloggers who want to enhance their visitors experience by adding interactivity through a smart and safe chat. “VisitorsCafe is also a solid business tool as it helps site owners increase retention and get more frequent visits,” explains Morgan. “So the key benefits of the product are community-building and revenue increase.”

The US Is Made For Entrepreneurship

Morgan, who graduated from Ecole nationale supérieure des Mines de Paris – the European equivalent of MIT – in 2005, had previously worked at McKinsey and in some hedge funds, but “figured those jobs weren’t fulfilling (him)”. “I decided to come to Harvard Business School and discovered the US way of entrepreneurship, which was a revelation to me!”

He started raising funds for VisitorsCafe in his second year at Harvard , and landed a Series A round of funding in July this year. The team comprises of six members – split between development and marketing – and its board of directors is formed of university professors and entrepreneurs.

“Entrepreneurship is a way of life, Morgan declares. “Creating positive value, get things done and move forward are my key drivers. I decided to make the step when I came to the US.”

“This country is really made for it (entrepreneurship).”