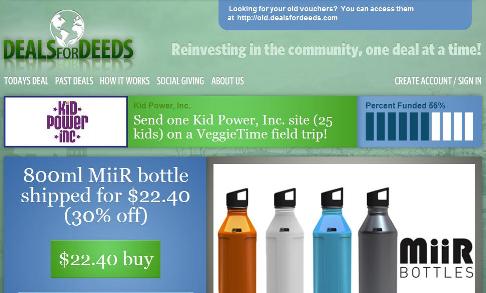 The daily deal scene is big and is getting bigger, with players constantly finding ways to differentiate themselves from the rest of the pack. Washington, DC-based Deal For Deeds (www.dealsfordeeds.com) takes the high road by combining social group buying with a social mission.

Deal For Deeds‘ current membership of 15,000 individuals get exclusive offerings from local DC businesses, vote on featured non-profit causes and collective decides on which charities the site partners with each week. The site also donates a minimum of five percent of gross sales to various charities. Since it was founded in April this year, Deal For Deeds has worked with more than 100 businesses to raise S$8,000 for 18 nonprofit organizations in Washington, D.C.

“Deal For Deeds created a fundraising model that worked for us,” said Ashley Lawson at Miriam’s Kitchen, a charitable organization that provides meals to more than 4,000 homeless men and women in DC. “They connected us instantly to the community and provided a means to meet an immediate and tangible goal.”

“Members not only choose what non-profits we support, they can check in periodically through the week to see how much money has been raised,” said Deal For Deeds co-founder Josh Hoffman. “Whether it’s 500 meals for the homeless or a new swing set for a neighborhood park, consumers and businesses can see exactly what they’ve helped to make possible.”

“The idea is that the program benefits come full circle: consumers, businesses, charities, and the local community all reap the rewards,” said co-founder Harrison Miller. “We bring together the individuals responsible for community growth.”

We like that the site’s new blog features community businesses, large and small and individuals who are socially and environmentally responsible. We can only hope that more daily deal sites around the world, especially those in Asia, picks up a socially-conscious mission like Deal For Deeds does as well.