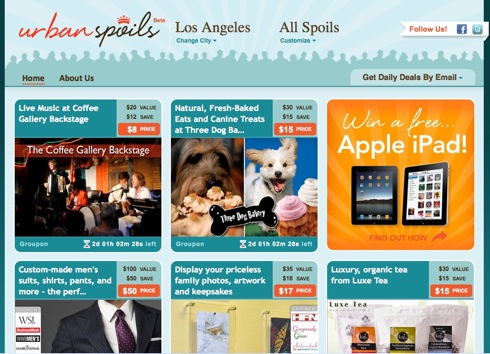 Seattle-based Urban Spoils is a daily-deal aggregation service that capitalizing on the rising trend of social buying, where the best daily deals across group buying sites such as Groupon, Gilt, LivingSocial, Tippr, BuyWithMe and HomeRun are cherry-picked and aggregated on a single site.

Think of it as the US version of All Deals Asia, compiling deals from various American cities instead of across countries in Asia. Launched since June this year, the company has already scaled to over 80 US cities.

What differentiates Urban Spoils – according to the company’s announcement during last week’s TechCrunch Disrupt – is its technology, which includes scalable aggregation, presentation and a next generation personal relevance engine to help users find the most relevant deals for their needs. The deal ranking and recommendation engine not only considers explicit user selection of city and category, but also tracks implicit user behavior and preference for deal value, price, discount and popularity, and takes into account aggregate deal engagement metrics (clicks, purchases etc). The engine then assigns users into personas – such as ‘sophisticate’, ‘recessionista’, ‘social butterfly’ – and re-ranks deals for each user accordingly. It’s like social online profiling, if you will.

“We are passionate about building innovative products in social buying space,” says Naveen Gupta, co-founder of Urban Spoils. “Plus it’s intriguing to guess for each user, the most relevant two or three deals out of the 1000+ deals we feature on our site every day.”

“For now, we are happy to focus on the consumer experience and partner with many of the top players for revenue generation. But we are starting to talk to national brands, especially after the incredible user response to Gap’s promotion on Groupon,”adds Gupta.