Bontq is a web-based project management and bug tracking application that lets you manage projects, track bugs, manage tasks and maintain documentation. It comes with a desktop application – written in java and hence runs on all platforms that support Java such as Windows, Linux and MacOS – that has a simple yet highly functional interface and so allows you to keep a close watch and track everything. There’s also Google Docs integration.

Developed over the course of two years by a small team of designers and developers based out of San Mateo, California, Bontq came about because one of them – who worked as a quality assurance specialist in a big international corporation for six years – had issues with the bug tracking system his company used, reveals Bontq spokesperson Andy Zwerdling. “He told me once that the bug tracking system used in their company was complicated, had a lot of functionality that was never used,” Andy explains. “And besides this, two separate tools are installed for screenshot capturing and video recording on every workstation.”

Andy then thought that it might be good to create a startup to solve this problem. He suggested this to the other members of the team – who currently prefer to remain anonymous – and they agreed. They later studied the market and found that there were no tools comprising the functionality that they planned Bontq to have. “We always knew that we will make a startup in area that we understand and meet every day,” he adds. 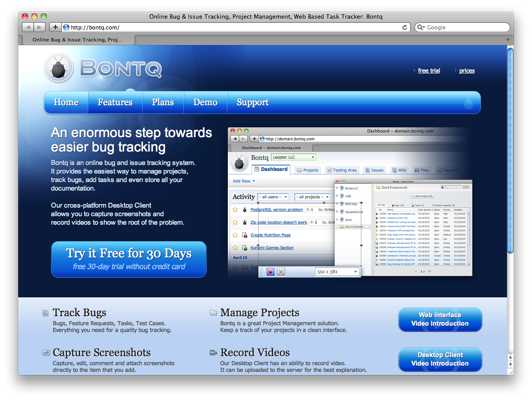 Bontq targets small and big businesses that require a project management or a bug tracking solution that will speed up their processes. Customers sign up for monthly plans – there are five paid plans available – and all are free to try for a month. They all come with unlimited storage, and differ only on the number of supported users, and the number of projects that a user can have.

Although they do acquire new customers every week, Andy says Bontq‘s biggest challenge was, and still is, spreading the word about their product. “Media giants like Mashable, PCWorld, New York Times and others are not interested in mentioning our product because it is not interesting for the general audience – the area of product application is highly specialized,” Andy laments.

“They prefer to write about startups that are simple and easy to understand for readers, most of the editors don’t even know what bug tracking is about and why our product is innovative.”

Hard Work Pays Off – At The End

“We’ve all worked for several big companies and always wanted to create an innovative startup that would allow us to work for ourselves and forget about the ‘boss’ orders’,” Andy laughs. “In our opinion, it’s great when you receive money for product that you simply love to develop!”

The founders have invested about US$50,000 so far from their own pockets. Aside from a lot of blood, sweat, tears and plenty of team work, of course. “We believe that if you clearly see your goal and don’t lose confidence, then one day all your efforts will turn into satisfied clients and increased income,” Andy says. “We’ve learned that you never receive all and at once. You won’t become a millionaire right after the release of your product.”

“It’s a hard piece of work when you develop it, and when you release it, you understand that the hardest part has just started.”

“Good luck to all those who try to start innovative and creative startups!”