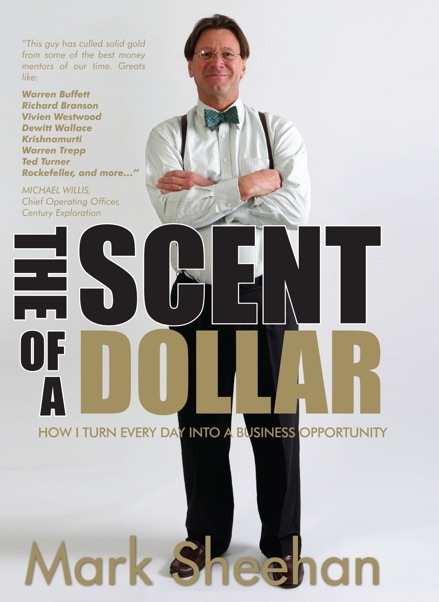 How do you make money out of an opportunity? Seasoned entrepreneur, marketing guru and business innovator Mark Sheehan –  – has some answers with his new book,” The Scent of a Dollar: How I turn Every Day into a Business Opportunity“. Sheehan, whose grandfather once described his grandson as someone who can ‘smell a dollar from as far away as three New York City blocks’, shares his experiences and insights of being engaged in the art of making money that have helped him ring cash registers for over 50 years.

The book includes tips and case studies of real life revelations that have led Sheehan to the moolah — from the rag trade, the retail market, marketing for legal and professional businesses, the travel industry and beyond. Himself a riches-to-rags-to-riches story, Sheehan made himself wealthy by applying his own business ideas and principles to numerous industries—proof that his success is not mere luck or good timing.

Here’s an extract from “The Scent of a Dollar“:

We created a travel business which invented its own success at a time when the industry was basically in the toilet – in 2005 you could buy an agency lock, stock and staff for bout $ 7,000 if you had the guts to pick up the debt-service from someone else. Retail agencies were shutting up shop everywhere, travel companies were declaring bankruptcy protection, and airlines were squeezing the life out of retailers on commissions. The ‘smart money’ ran for cover when they saw us coming.

Savvy online travel sites and booking engines were progressively winning over new customers and confidences via the internet. The economy, in general, was headed south along with the local foreign exchange rate.

It was not the best of times to enter into a new business in travel but we’d done our homework and felt we’d be able to differentiate ourselves from the rest of the travel herd.

Our plan was to provide consumers with an ‘uncle in the business,’ via television and promotional sales of a buy-one-and-get-one-free hotel program. Our plan simple:  enhance the lure of a holiday deal by offering consumers a buy one and get one free hotel deal.

Any ‘club member’ wanting to take a domestic holiday could also belly up to the dinner table at the same hotel or resort they’d booked, and sleep for free if they took their meals in-house.

We spent months doing the contracts and explaining the idea to hoteliers and resorts. We were not asking for promotional dollars or discounts. We only wanted the best rate for one night and a second night for free when the property had vacancies.

We spent thousands of dollars on brochure and packaging designs, produced the adverts, booked TV talent and air time, and set up the phone bank and credit card systems for the ‘all-go’ signal.

And we went to air on nationwide television and fell flat, very flat. The idea was new to consumers, misunderstood by some properties and in general barely made back its money.

Phone bank operators didn’t understand it either. Our gravy train was derailed and in the wrecking yard before really leaving the station.

As a start-up outfit, we were terminally ill. We sat with 200 properties who’d all agreed to give us fantastic deals, thinking we’d promote their businesses. But there were no takers. Members were expected to pay a slim $99 plus postage-and-handling for our 10 free night vouchers plus the property catalogue.

We had a small mountain of them stacked on a palette in the office, with no-one to send them to.  We needed to shift gears in order to keep going. So we dove into the ‘on-pack’ business as a value-added idea.

We sold the idea of ‘buy one and get one free’ on breakfast cereals, sauces, alcoholic beverages, ladies’ feminine hygiene products and carbonated drinks. It cost major clients pennies to put a redeemable certificate on the side of a box, carton or can saying: ‘Buy this item and we’ll give you a free night’s accommodation voucher!’

The product took off like a Kentucky Derby cup winner and we were soon getting fan mail from hoteliers who claimed their properties were seeing a 40–60 per cent increase in traffic thanks to our voucher efforts.

Initially, we went directly to the brands themselves, skirting their advertising agencies of record. Another step-over-yourself mistake for longevity. We soon discovered that most large brands work via promotional and ad agencies and we were creating work for the home office they didn’t have time for, or wanted to touch directly.

So we began speaking directly to agency groups, happy to be third party providers.

This was a massive oil can, lubricating doors with other brands and connecting us to an entirely new audience.

We agreed to avoid ‘going direct’ and the promotional agencies agreed that if they had on-pack promotions with any and all their clients, we’d be a shoe-in for the work.

The reason this promotional item worked and still works today is the price-point. The buy- one-get-one-free concept is delivered for pennies, yet among consumers it had a very high perceived value. For the same cost of  jar of peanut butter, you could buy one product with our voucher attached and honestly save $80-$120 over a two night stay in a hotel or resort. Which product do you think flew off the shelves?

‘Everyone Wins!’ we called it…

Cash Register: Perhaps the most important lesson we learned from the start-up of the Free2Travel business, was the necessity to adapt. Like chameleons which can change color, depending on which leaf or limb they’re occupying, we needed to evolve smartly, or be beaten badly.

If I and my Free2Travel partners had stuck to our guns with the original business model, we’d have gone down the gurgler within the first six months. We’d have taken a good bit of our friends, family members and investors’ money down the poop-chute as well.

But our ability to dance and weave, create new niches and service a new, well-heeled customer instead of scrapping it out with the bottom-feeders, gave us both the power and credibility we needed to get a foot-hold. And the business had bloomed.

You can read another sample extract here.

So if you want to learn from Sheehan how he turns everyday opportunities into cash, do check this book out.