Social media is big – and getting bigger – so it’s not surprising to see a slew of companies being set up targeting this nascent industry. Take 24seven Communications, for example. The Singapore-based dedicated social media consultancy was started by three members of the Singapore social media scene – Claudia Lim, who’s active in community groups such as The Digital Movement and Social Media Breakfast, programming whizz U-zyn Chua (who created community metablog Ping.sg and messaging platform Widgeo.us), and avid blogger Diana Lim, previously a stay-home mom – to provide exactly such social media management services.

“We saw the growth and opportunity in the social media space a couple years back, so we plunged ourselves into the unknown, hoping to fill in the gaps between marketing, advertising and public relations with social media,” says Claudia, 24seven‘s ‘big head chief’. She had registered the domain name 24seven.sg a few months before thinking about to starting a business, and decided the name had a nice ring to it. 24seven Communications was registered.

The three of them first started the company without any money, not knowing where it would take them, except the feeling that they just had to ‘do it’. Surprisingly, says Claudia, they’ve survived the initial stage of starting up. Today, 24seven Communications has a team of three  – Claudia, Diana and their latest member, Kris Tan.

Dipping Into The Social Media Business

Claudia says that in this age of digital, everyone and anyone can be an influencer in social media. Everyone tends to focus on the influencers are the best known, but how about those unknown gems, she asks. “That’s why we hope, through 24seven, we can help provide support and opportunities for them.” Social media, Claudia says, is still a space misinterpreted by many. “(Too many) approach it as a new channel for blasting of their messages and own agenda.”

Claudia recalls that one of the hardest things for the young team at the start was getting clients to sign on the dotted line. “Closing the first key account was tough. No one would risk working with a team with zero portfolio or case study,” she says. As a new and small company, they had to work ten times harder to prove themselves to clients and stakeholders. “Even if it means getting only few hundred bucks every month so as to build a portfolio, we just had to do it.”

“That period was tough,” she grimaces. “We lived by the month, not knowing if we would ever survive the next.”

Thankfully, they managed to secure enough projects to get the team going. “We always believe in giving it forward. Good karma is very important.” Perhaps that’s one reason why 24seven has been getting pretty good referrals from our clients, which Claudia says they really appreciate.

The team is incredibly shy about their achievements to date, explaining that they are still trying to find a right blend to the team and ‘contented enough to be working in such a comfortable and creative space’. They’ve handled blogger engagement campaigns for the Singapore Civil Defence Force, Standard Chartered, the InfoComm Accessibility Centre, as well as digital media consultation and training for Singapore’s National Day Parade last year as well as this year. 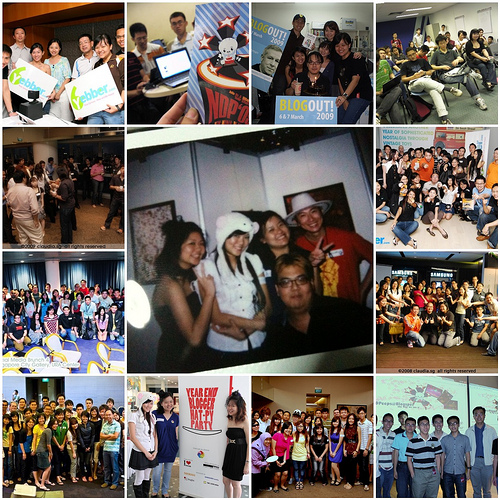 Some of the social media events that Claudia Lim, founder of 24seven Communications, have been involved in.

“No other job will ever beat the kind of excitement and rush one gets for starting up on your own,” says Claudia about taking the entrepreneurial route. “If you ask if I will do it again from ground zero, I will.”

Co-founder Diana says that through 24seven, she has evolved from ‘knowing nothing’ to knowing ‘something of everything’. “Indeed, I’ve learnt so much because of the steep learning curve, and I’m grateful to Claudia for her guidance.”

“In this business, we need lots of passion and that’s the leading asset we share as a team.”

It’ll be interesting to see how they – and other social media consultancy services – pan out in the coming future.