The Infocomm Development Authority of Singapore (IDA) office was surprisingly crowded on a Saturday morning. A youngish, somewhat geeky crowd has descended here, of all places, and the air is literally buzzing with excitement. Easy banter reverberates throughout, punctuated by squealing laughter. Some call out as they spotted familiar faces, and eyes, none too subtly, check out the opposite sex.

This almost collegiate atmosphere seems totally out of place in the offices of the government agency that’s tasked to enhance Singapore’s global economic competitiveness, attract foreign investment and sustain the nation’s long-term GDP growth through technology development. Not quite so evident is the fact that a few in the crowd are amongst Singapore’s youngest and brightest technology talents – web developers, UI designers, programmers, and yes, even hackers.

Welcome to BarCamp Singapore 4, which IDA is playing host to.

A BarCamp, for those who’ve never been to one, is a user-generated event comprising of multiple open-style participatory workshops and discussion sessions whose content is provided by the participants. BarCamps are usually put together by volunteers, and it’s mostly free.

To those who’ve never been to one, the experience can be strangely familiar, yet jarring, at the same time. Preetam Rai, one of the volunteer organizers of BarCamp Singapore 4, says it’s a way to bring together technology developers, the creative arts people, educators and people who don’t call themselves geeks but are interested in technology, together on the same platform. “When people get together this way, we can get interesting conversations,” he adds.

Presenters at a BarCamp are primarily chosen by votes from the audience. Someone who’s interested to speak on a particular topic, for example, would write down their topic on a Post-It note and stick them on a wall. Participants would then vote for the topics they’d like to hear. During BarCamp Singapore 4, suggested topics ranged from the downright technical, such as “Augmented reality on mobile” and “YouTube APIs”, to the outright quirky “How to explain difficult concepts to lesser beings” (which turned out to be a massive hit with the crowd).

Sharing and Learning From One Another

It’s the first BarCamp for Ho Sun, an entrepreneur and founder of LittleLives.com, who relished the chance to meet so many “techies” and attended Guyi Shen’s “Lessons from my three web startup failures”. “It’s humbling to see someone openly discussing what he thought were the reasons for his web startup failures,” says Sun, “and not many people will stand up to their mistakes.”

“Perhaps I’ll present the next time.” She was particularly surprised at the sessions’ simple voting process.

Fellow participant Arul Kumaran, a freelance multi-platform developer who is on the verge of starting a product development company, is at his third BarCamp and presented on an open source tool called Titanium. He’s impressed at how BarCamps in Singapore have grown. “Geeks are so disconnected in the real world, but yet so connected in the digital social networks,” he says. “Events like this help to attach a face and soul to the friend we have in the virtual world.”

Supporting BarCamp is one of the ways IDA is hoping to encourage Singaporeans to lead digital lifestyles. “Organising BarCamp is part of a two-year outreach programme to build a new infocomm-powered vibrancy through a sophisticated digital lifestyle,” says Ng Wan Sin, a senior consultant from IDA‘s Technology & Planning Group. “BarCamp Singapore 4 is a great social platform for us to be engaged with social media enthusiasts, experts and strategists, who could play important roles as force multipliers and influencers in this outreach.” She adds that any industry can derive opportunities, partnerships and ideas from such grassroots- and community-led events.

Preetam agrees. “Such community events helps bring up interesting projects that local developers and enthusiasts are working on. It also helps local technologists from various fields come together and find people to collaborate with.”

“For example, if I am an iPhone developer looking to do some server-side module for my game, I might look for a PHP guy. I might also find a UI designer who can help me improve my design.  I could talk to local iPhone end-users and figure out what local solutions they want develops to build. A musician I meet might give me ideas on improving my audio score.”

One can say the possibilities are endless.

One key advantage that a BarCamp has is its extremely low barrier of entry to participation compared to the thousands of dollars a partipant has to pay to attend a regular conference. “We are able to run such events at very low cost”, says Preetam. “We avoid the overhead of inviting speakers and accommodating them.” And because it’s free, it’s open to anyone who desire to learn. One Singapore Polytechnic lecturer mandated her Media and Communications students to attend BarCamp Singapore 4, even assigning credits for workshop participation and online discussions.

“BarCamps are informal events, there is are no reserved seats, no VIP areas. We think every one has some expertise in some unique area, every can ask a question from a different perspective. We hope BarCamps will accelerate sharing and  presenting ideas and help us make connections outside our professional space and geographical region.”

On the other hand, being almost completely freestyle also means that participants don’t know what to expect when they attend one. In BarCamp Singapore 4, some participants complained of an affiliate marketer who took up three precious speaking slots.

But one thing is for sure – BarCamps are here to stay. Upcoming are a couple of mini topic-specific BarCamps – TravelCamp for travel enthusiasts, and FilmCamp for filmmakers.

BarCamps Around The Region

BarCamps are also getting increasingly popular across the region, and the recent ones in Kuala Lumpur and Bangkok were heavily subscribed (the one in Bangkok drew over 700 participants). The next Barcamp happening in this region will take place in Saigon on the 13th of December. “Having attended a few of these, I am amazed at the knowledge and energy that I see in South East Asia,” Preetam says. “Regional travel is inexpensive and it will be well worth your time.”

If you can’t attend the regional BarCamps, BarCamp Singapore 5 is likely to happen in March 2010. Look out for it. 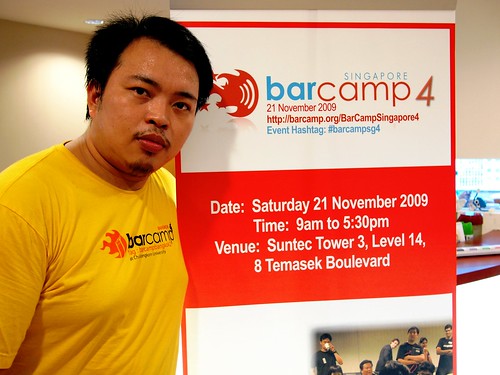