Local startup Widgeo.us has been attracting some attention lately since featuring recently at CommunicAsia 2008, BarCamp Singapore as well as Unconference Singapore 2008. We take the opportunity to speak to co-founder and CEO Ridzuan Ashim in a question-and-answer.

1. Tell us what Widgeo.us is in simple terms. What does it do?

Widgeo.us is a web-based universal cross-channel communications platform – cheem (confusing) right? Well, what this really means is that it is a platform that allows application developers to create applications that work seamlessly across multiple channels such as email, instant messaging, microblogging, text messaging etc.
Of course this also means that end users can have applications that “follow” them wherever they go. No more being tied down to a single software client and all.

2. Who is Widgeo.us’ target audience and what does it do for them?

We’re targetting the masses, really, (although) we’re doing this strategically.

Right now, there are 2 main groups we’re looking at. Firstly, the developers. Because a platform only has as much real value as the applications that are built on it, we’re trying to touch base with developers all over the world. Again, we’re doing this by looking at those in the region first).

What’s in it for the developers to come aboard? There’s rapid deployment and increased exposure. While the latter is not very apparent right now, we will have mechanisms in place to provide cross-marketing of applications soon. As for rapid deployment, it’s because our platform allows developers to focus on building their core application logic and not waste time on creating the components to interface with the plethora of communication channels that exist and are continuously popping up.

We believe that if we can bring aboard valuable application developers who create applicationss of value, users will have a reason to come (and adopt the platform).

We’re also looking at companies and organisations that can benefit from increased support of cross-channel communication and may be interested to license our platform infrastructure. Again, we believe that hardware solutions for having the value we bring to the table are highly expensive and building a digital system from scratch is both time consuming and costs a bomb.

Well, Widgeo.us really is a play of words. We wanted something to represent what we do and what we believe in. So the unlike the belief that “.us” is a geographical indicator, we actually wanted to stress the “us” as in “you and me”. And then there’s Widget + Homogeneous = Widgeous. If you look at our ecosystem, we will eventually have hundreds, if not thousands, of applications that ‘float in the cloud’. These ‘widgets’ would work across many channels thus making it a rather homogeneous platform. 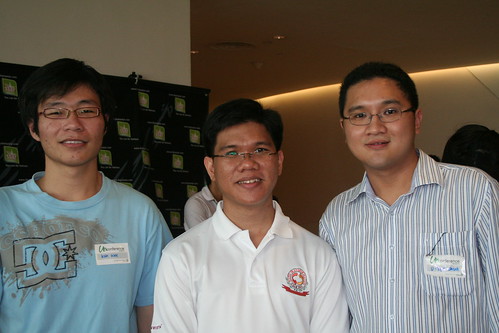 There’s U-Zyn who’s the CTO. More importantly, he’s also the architect of the platform core. He plays a key role in engaging the developer crowd because he’s a hardcore tech geek.
And then, there’s Kah Wee who is the programmer in the team. U-Zyn and him work very closely together to implement our development plans into the visible platform that everyone uses but almost never sees. They’re the unseen heroes of the team.

Of course, there is also Aen who is our art director. He focuses on everything from design to UI experience. Basically, everything pretty that you see and the usability of it, that’s him.

Lastly there’s me. I’m more of the business development guy. Right now, I basically go around and try to forge partnerships with others and trying to convince them to adopt our platform. And because U-Zyn and I are the co-founders, we are also actively going around looking for our next round of funds.

5. What is the business model and revenue model?

Right now, we have two primary means of monetization – advertising and licensing. The former’s not happening so soon yet. But as for the latter, we’re allowing companies and organizations to use a rebranded version of the platform for their own use for a fee. No ads, no Widgeous branding on it and they even get to keep their own database of users.

6. If there is one thing in the world you want to change, what would it be and how does Widgeo.us help you do that?

We want to make communication easier so that we can access information and interact with both the digital world (applications) as well as other people more efficiently.

Widgeous helps this by allowing applications to work seamlessly across various channels. This translates to users not being confined to a single channel in order to interact. Think IRC and you’ll realise that people need to all be connected using the IRC client. But if you look at how we’ve implemented The Floating Room, you’ll realise that people can ‘chat’ regardless of where they’re from. More functionality will also be added in the times to come.

7. Tell us a little about yourself and what you do at Widgeo.us.

Well, I’m Ridzuan Ashim, CEO and one of the co-founders of the company. Like I mentioned before, I’m the business development guy in the company. And in a startup company with a total headcount of four, the title means nothing. I focus on trying to forge partnerships and securing the next round of funds, strategising for product development, marketing, dreaming about the future and everything else that’s non-technical.

Aside from Widgeous, I’m actually still an undergraduate in Computer Engineering over at the Nanyang Technological University. I’ve put my studies on hold for 2008 to focus on this. In my free time, I enjoy playing computer games, going on facebook, reading books (both fiction and otherwise). Oh and of course, doing all that by the window in a coffee joint is a big plus.

And if I can do a little plug, we’re currently looking for our next round of financing. Anyone interested or has any questions regarding Widgeous can contact us at:-

Also, check out an audio interview of Widgeo.us by the uber-geeks over at Tech65, and a great interview over in SGEntrepreneurs.