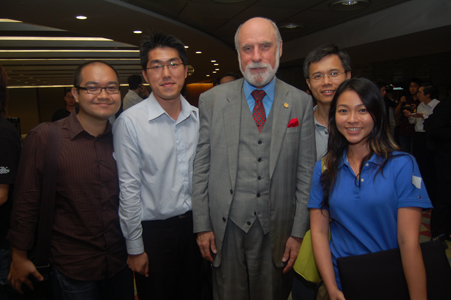 Posing for a photo with Vinton Cerf, father of the Internet (I’m the bald guy on the left.)

Some weeks ago, Google evangelist Vinton Cerf dropped by Singapore recently and I had the opportunity to listen to him at an invite-only closed-door session organised by The Digital Movement.

Vinton Cerf is best known as the “Father” of the Internet, and he shared his vision of what the world would be like in the year 2035. Some of his observations:

– The Internet will be 52 years old.
– Internet penetration will be more than 70% (world average).
– Device penetration will be 60 billion (which means 10 devices per person). 10 billion of those would be mobiles.
– There will be 5.7 billion Internet users (out of 8.12 billion population).
– Information consumers will be producers.
– There will be innovative interfaces – I/O discovery, voice and haptics.
– Widespread adoption of navigation systems and geo-location based services.
– Internet-enabled wine corks, socks, automobiles, refrigerators and even bathroom scales!
– And many more.

Honestly most of those ideas aren’t exactly new – for example some of the latest mobile phones already incorporate haptics (or tactile feedback) and GPS navigation. But Vinton was extremely charming – his 4-piece suit no doubt reinforced his father-figure look – and smooth in the delivery of his ideas so he had the room lapping up every word.

What would I be doing in the year 2035? How can I make sure I continue to be relevant in such a highly-connected, digital world?

Five Questions You Need To Ask When Scaling Your Business