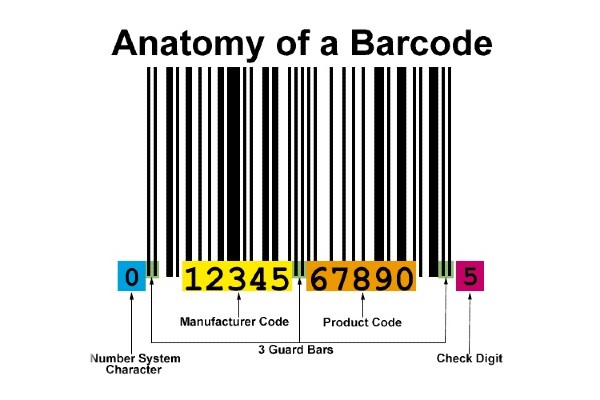 To many people, registered barcodes can appear to be complex and confusing. In this article, Entrepreneur Info entrepreneurinfo.co.za attempts to lay out the basics and decipher the ‘code speak’ sometimes used when dealing with registered barcodes. It really is easier than you think!

Simply put, they are a set or string of lines and spaces of varying widths. These represent characters, which can be numeric or alphabetic, or a combination of the two. These strings are linked to data files, meaning the information is encrypted. When barcodes are scanned, the scanner ‘talks’ to a computer where the information is stored.

Registered barcodes, sometimes called ‘symbology’s’, come in various forms, for example Code 39, Code 126, UPC (Universal Product Codes) and EAN (International Article Number). A number of these broad categories are further divided into subcategories. Different formats are used for different purposes – it is not a ‘one size fits all’ approach.

They are read by light being cast by a scanner onto the barcodes, enabling the scanner to read the reflection. If there are dark spots or reflections, the scanner will battle to read the images (think of the last time you were at the grocery store).

There are many different types, but we will discuss the most commonly used ones. These are:

Used extensively in the retail space, UPC registered  barcodes were originally developed for grocery stores. These contain a 12-digit number, which are needed for items being sold by retailers. Every product requires a unique UPC Code, which is allocated by the Global Standards Organization.

Originally known as the European Article Number, this code was specifically developed to trace books, and tends to be used by universities and colleges, libraries, wholesalers, and bookstores. EAN registered barcodes are 13-digit numbers that are used to create ISBNs (International Standard Book Numbers) so that every book can be tracked.

These are numeric-only and are used to encode pairs of numbers, with each pair creating one symbol. Because of this, the numbers need to be even. Interleaved 2 of 5 are commonly used in manufacturing, packaging, warehousing, and distribution. It was developed in 1972 by David Allais, who was a leader in design and the automatic identification industry. Also known as ITF, 2/5 Interleaved or I 2 of 5, it is called ‘interleaved’ because the data is interweaved between the bars and spaces, thereby saving space.

One of the oldest formats around, Code 39 is a 1D, alphanumeric code. It was developed in 1974, when it was the first alphanumeric code to be developed. This code is often used in government, logistics, health services and the electronics industry. It does require more space than some others. Code 128 tend to be replacing Code 39 registered barcodes, especially where space is a concern.

This is a compact code that is used across the globe in shipping and supply chain operations. Code 128 are able to contain a lot of data, giving it an added advantage. It is often used instead of Code 39 and Interleaved 2 of 5 barcodes because it has a high density and is more flexible. Code 128 registered barcodes are used in electronics, blood banks, education, and healthcare.

One of the most common 2D barcodes, Data Matrix are small and square and look a bit like a checkerboard and are capable of storing significant amounts of data (up to 2000 characters). Because they are two-dimensional, these require more sophisticated equipment to be read, such as Smartphones, which take a photograph to decipher the information. Data Matric barcodes are popular in the healthcare industry, as well as the automotive and electronics industries.

PDF417 are 2D and are generally used for identification, such as those used in ID cards and driver’s licences. They have superior capabilities, for instance they can encode links to more than one data file. The downside is that they require far more space than other registered barcodes (up to four times as large).

The most advanced type of code, QR Codes are used extensively in marketing and entertainment, where a hyperlink leads the reader to a website, video clip or promotional offer. The advantage of using these barcodes is that they can be read by any consumer who has a Smartphone.

Which barcode is right for you?

The format you choose will depend on the purpose of your product. For example, if you need small registered barcodes, Code 128s will be your best bet. However, if you need them for items to be sold in a retail store, EAN would be more suitable.

Answering the following can help you to choose the right registered barcodes for your needs:

To select the one that is right fit for you and your business, ask us to help you with assessing your needs. We are sure to have the right information for you!