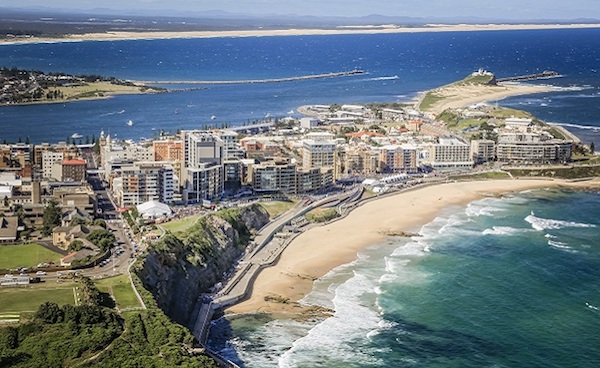 Newcastle, a major port city and prime residential area in the Hunter region of New South Wales, is known to be one of the economic and business centres in Australia. It has experienced economic growth and urban expansion in the past decades because of its roots in the coal and mining industry.

Newcastle has been amassing wealth and popularity mainly because it has grown from an exclusively industrial to a diverse and dynamic economy.

Newcastle, also known as the “steel city”, made most of its wealth in the steel and mining industry in the past. In recent years, its technology, manufacture, and service industry became the source of the city’s wealth.

Just two hours north of Sydney, Newcastle has been the new residential area where an increasing number of Australians choose to reside to invest and grow their wealth. The Port of Newcastle, the largest trading port and gateway located in eastern Australia, has been responsible for much of Newcastle’s fortune.

On the other hand, remarkable wealth and economic boom in Newcastle can also be seen in real estate developments, tourism, lush vineyards, commercial centres and start-up businesses.

History of Wealth in Newcastle.

At the beginning of the 20th century, Newcastle gained most of its wealth through its leading economy, coal mining. Along with mining, the production of steel, aluminium, lead and zinc was also another industry that brought money to the Hunter Valley Region.

It was in 1791 when coal was discovered in Australia in the Hunter Region by William Bryant, a Cornish fisherman and convict. In 1804,  the first permanent coal mine was established in Newcastle. The early miners in the area were government convicts and miners from Britain and Wales.

In 1885, Broken Hill Proprietary Company Limited (BHP) began mining operations of silver, zinc and lead in Broken Hill, NSW. For decades, BHP became one of the city’s biggest employers. For decades, BHP was one of the city’s biggest employers, opening Newcastle Steelworks, a steel-making plant that facilitated the industrialisation of the whole country, in 1915.

The Boom of Real Estate in Newcastle.

Mining and steelworks have dominated the industry in Newcastle up until BHP closed in 1999. In more recent years, it has seen the growth of other industries such as local property management companies and real estate.

A significant number of Australians buy properties in Newcastle because they are more affordable and have great potential to yield high returns. Newcastle’s CBD is fast becoming a place of investment opportunity for many Australian professionals who are looking to grow their wealth. Compared to Melbourne and Sydney, Newcastle offers buyers a better deal with a high potential for growth.

Aside from investment opportunities, more people move to Newcastle because of the natural attraction that beaches and waterfront spaces have to offer. With key projects such as transport systems, waterfront developments and increase of public spaces, Newcastle grows its liveability and is quickly becoming an attractive residential area for Australians.

Although Newcastle is flourishing as an exciting urban centre, it still enjoys a more laid-back environment than Sydney. The second oldest city in Australia, Newcastle is becoming a smart city while still retaining its cultural and traditional heritage,

The Newcastle Smart City Strategy is a local initiative that aims to facilitate economic growth, improve efficiency in operation, and make Newcastle a sustainable and green city. It also seeks to address the needs of the community better, involves and encourages the community to participate, and makes the city an international smart city. This strategy will further strengthen Newcastle’s transition from an industrial town to a diversified economy.

With a solid infrastructure from an industrialised past combined with skills and technology, Newcastle sees a future of burgeoning investment.

The Wealthy and the Famous in Newcastle.

Newcastle is home to many millionaires from different sectors. One of them, former billionaire and now bankrupt Nathan Tinkler, thrived in the coal mining industry. He topped the 2011 list of the richest people in the Hunter Valley Region with earnings of $1.1 billion. Aside from being a mining magnate in the past, he also owned a soccer club and a rugby league club.

Another Newcastle achiever is Casey Stoner, a former professional motorcycle racer and World Champion. Worth $20 million, he is one of Australia’s youngest millionaires. Joining him in the list of the wealthiest in Newcastle is another racer, Motocross and Supercross champion Chad Reed.

Successful business owners are also making millions and bringing in wealth in Newcastle. Craig Leonard, a diamond specialist and buyer, founded the largest supplier of pink diamonds in Australia, the Argyle Diamond Investments. Another millionaire is the Cessnock-born CEO of NIB, Mark Fitzgibbon. NIB is now Australia’s fastest-growing and most popular health insurance company.

In the education sector, Kip McGrath also acquired a significant amount of wealth. McGrath is the founder of the Kip McGrath Education Centres, a franchise business that offers the opportunity for teachers to own a tutoring centre. At present, they have around 560 franchises of tutoring centres around the world.

There are also a handful of millionaire models, internet personalities and celebrities from Newcastle. Jennifer Hawkins, whose current net worth is $35 million is an Australian television presenter, model, and beauty queen. She was ranked 84th in the 2019 AFR Young Rich List. Another Australian actress who made a substantial amount of wealth from the entertainment business is Abbie Cornish. Her net worth is $8 million.

A former internet sensation and now fashion label creator Brittney Lee Saunders made an astonishing amount of wealth as one of the world’s most famous beauty bloggers with over 80,000 followers on YouTube. For the younger generation, the Norris Nuts are the new internet superstars. Composed of Olympic swimmer Justin Norris, his wife Brooke, and their kids – Sabre, Sockie, Biggy, Naz, and Disco. They earn millions by doing vlogs on everyday family life for their 3.42 million YouTube followers.

The real estate industry also has some successful, albeit less prominent millionaires. Newcastle property developers Hilton Grugeon and Jeff McCoy have not disclosed their companies’ earnings, but they are still considered the wealthiest and most successful millionaires in Newcastle.

With the digital economy, initiatives that support investments and businesses, and a skilled workforce, Newcastle continues to be at the forefront of development and will continue to thrive as one of Australia’s wealthiest cities.