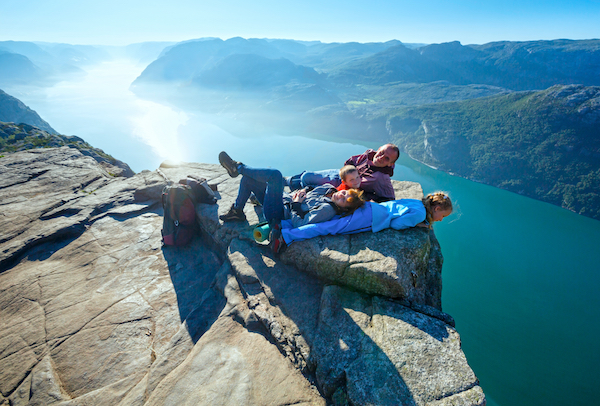 As Tabitha and Amanda walk out onto the sea ice, testing their snowshoes in the soft snow, it’s apparent Amanda isn’t comfortable. Tabitha marches ahead about 30 yards and turns to find Amanda stopped in her tracks. Tabitha appears to be urging her on, but Amanda shakes her head.

Amanda: “I don’t like being on ice. We don’t know how thick it is.”

Amanda hesitantly begins to walk out to Tabitha. She’s facing her fear.

Tabitha and Amanda are members of our team that arrived yesterday in the village of Qikiqtarjuaq on the east coast of Baffin Island, and are now acclimatizing to the new Arctic environment. It’s everything we’d anticipated: icy cold (-13F), barren and windswept and humbling as hell.

The night before, while we were out gazing at the northern lights, a local resident hurried out to warn us, “You shouldn’t be out on the sea ice at night. The polar bears come into town at night. They’re hunting now.” We knew there’d be things we didn’t anticipate – but polar bears in town?

Embarking on the unknown can be a choice we make, such as going on an expedition to an inhospitable place, or a situation forced upon us, such as having to re-structure our lives to respond to an insidious pandemic.

In this case, we’ve purposely chosen to travel here to make the crossing of Baffin Island’s Akshayuk Pass. This is an iconic 100-kilometer coast-to-coast route in the Canadian Arctic. Each team member on the expedition is grappling with some level of fear of the unknown. Amanda’s foray onto the sea ice is scary for her. Kevin, although experienced in the polar regions, has jitters around leading a team this large and inexperienced in such a dangerous location. Tom and Paul are nervous about our close proximity to polar bears. Nearly every team member has anxious thoughts, but we’re trying to tamp them down and rely on the mental fortitude we’ve each developed as we meticulously planned and trained for our adventure over the past year.

Similarly, as we traverse into the unknown of what the pandemic means for the health and livelihoods of ourselves, our loved ones and the world at large, we can’t let all the uncertainty of this new landscape cripple our ability to move forward.

For our expedition, we’ve prepared well from the standpoint of gear, direction and goals, but our emotional resilience is really unknown. Not only will there be cold, hard work pulling sleds, and long, difficult days, there will be moments of stress and anxiety. Being able to emotionally regulate that fear, stress and anxiety will be critical to the team’s safety and success. Essentially recognizing those emotions, labeling them, and reframing the emotion can help each of us influence how we experience and express our feelings, and improve how we function to get through the tough stuff.

The coronavirus pandemic gave us little time to prepare, and we may be surprised at the emotions that surface in response. Are we panicky? Stoic? Have we launched into take-charge mode? It’s important, just as on an expedition team, that we take stock of the emotions we’re feeling so we can deal with them accordingly and in a way that ensures we’ll get through this hardship safely.

Talking out fears and frustration.

The next day, we’re bundled atop three huge Inuit sleds and dragged over rough sea ice for three hours to the start of our route. The temperature hovers around -4F, but the windchill from the speeding sleds drops it further. By the time we arrive at the head of the frozen pass, it’s too late to begin moving and we’re forced to camp precisely where Parks Canada has told us not to. We’re a big group of 11 that will appear intimidating to a polar bear, but the danger is still real. When we start out, hauling a sled in soft snow and in frigid conditions takes its toll. Everyone is tired at the end of the day with some pushed to their limits. These challenges come to a head when we reach camp. We talk it out. Emotions rise to the surface, anger generated by fear and exhaustion, and we collectively regulate by talking and listening to the frustrations. Using the exact labels of our emotions allows us to regulate ourselves and each other. We agree that we have to speak up sooner as we approach our limits.

A difficult experience of any kind is wrought with uncertainty that can mire us in anxiety and downright negativity. With the pandemic forcing us to self-isolate, curtail our activities and watch as infected and dying numbers tragically climb, such feelings, although natural and expected, can’t be allowed to fester. Talking through them with a family member, friend or mental health counsellor can help us self-regulate and manage those feelings effectively.

Regulating reactions to lighten the strain.

The landscape we move though is unlike anything we’ve ever encountered. We pass through towering granite walls – among the tallest in the world. Amazingly, with the expedition well underway, Tabitha and Amanda, the two least experienced team members, prove to have the most upbeat attitudes. At the end of day, huddled together in the eating tent waiting for our freeze-dried meals to reconstitute, Tabitha slips her meals inside her jacket to capture some of its warmth. Unfortunately, Tabitha’s Ziplock wasn’t sealed properly and a big glob of spaghetti burps onto her clothing. Instead of cursing and complaining, she launches into a silly monologue about barf in her jacket that sends the rest of the team into hysterics. The mishap was obviously unnerving, but Tabitha turned it on its head and chose to joke about it.

We can chose to face this pandemic with anger and frustration, or we can regulate our reaction and look for opportunities to find humour or lighten the strain. Recognize that giving into despair doesn’t serve you, while seeking out simple pleasures and moments of gratitude will keep you centered.

It takes us eight days to complete our journey across Baffin Island, but in that time something special happens. We realize we’re able to face our fears, tap into our resolve and find positivity in the midst of struggle. By the time it’s over, we’ve been changed forever.