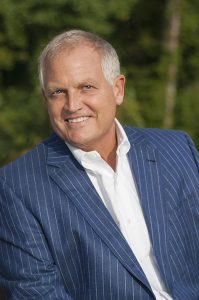 Tired of managing “comfeartable” employees — workers who are either too comfortable or too fearful to do things differently? Meet Bill Treasurer. A workplace expert specializing in courage-building, Treasurer is on a mission to help entrepreneurs and small businesses create a more courageous workforce that delivers results.

For the tenth-anniversary edition of his trailblazing book, “Courage Goes to Work: How to Build Backbones, Boost Performance, and Get Results“, we sat down with Bill to talk about why courage is today’s most critical business skill.

What in your professional background led you to focus on courage?

I was a springboard diver in high school where I grew up in New York. I was great on the low board. Colleges started to dangle scholarships in front of me, but they wanted to know my high board list of dives. But I’d never bothered to learn high dives because I’m petrified of heights!

My coach wouldn’t let me run away from my fear. Instead, he found a diving board that was built on a hydraulic lift, like you see when you take your car in to get an oil change. He would incrementally move the board to higher heights. It took three months, but I was able to get a high board list of dives and a full scholarship to college.

Later, I would use this same incremental process, modulating between comfort and discomfort, to learn how to dive off a 100-foot high-dive platform. I became a member of the U.S. High Diving Team, diving at speeds of 50 mph into tiny pools. I completed 1,500 dives over seven years, encountering fear (and courage!) on a daily basis. I’m still afraid of heights, but I learned that acting, despite being afraid, is what courage is all about.

Today, my business is dedicated to helping people and organizations be more courageous. I help people take on whatever metaphorical high dives they’re facing, since everyone has to face high dives in work and life.

Why is courage a critical skill for entrepreneurs and small businesses?

Courage is the first virtue of organizational performance because it’s the lifeblood of leadership, entrepreneurship, and innovation. But in times of change and uncertainty, too many workers become safety-seekers, often to the detriment of their organizations. When fear directs workers’ behaviors, they become distracted, afraid, and unproductive, just when their companies need them to be the opposite. Fear is bad for business.

Courageous workers, by contrast, step up to challenges, seek out leadership roles, and assert innovative ideas, all for the good of the company. As I explain in my book, entrepreneurs need to be opportunity seekers and capitalize on the opportunistic changes occurring within your workplace.

Think about all of the other concepts associated with entrepreneurialism that rely on courage. Presenting to large groups with confidence takes courage. Handling difficult client negotiations takes courage. Offering candid performance feedback takes courage. Delegating to your direct reports and entrusting them with big tasks takes courage. Accepting feedback maturely, without feeling like your authority is being disrespected, takes courage.

When everyone is working with more courage, the entire organization is transformed for the better. Research shows that courageous workers seek out leadership opportunities, step up to challenges, offer innovative ideas, passionately embrace change, and are more productive. In short, courageous workers get work done!

In your book, you divide courage into three buckets: TRY, TRUST, and TELL courage. What are examples of each?

TRY Courage is the courage of action and initiative. It involves taking a leap before the safety net underneath you is fully built. It’s the courage to attempt something for the very first time, what I call “the courage of first attempts.” The entrepreneur who strikes out on his or her own is a perfect example. I did this myself. I left a safe-but-confining six-figure job with Accenture to start my own business — something I had never done before.

TRUST Courage involves releasing one’s need to control or be perfect. Trust is essential for healthy relationships, but getting to trust takes courage because it requires vulnerability, which is especially hard for those who try to portray invulnerability. By middle age, most people have been betrayed at some point, which is why trusting others requires so much courage. In the case of the entrepreneur, the first person to join your business (e.g., the second employee) is trusting the entrepreneur’s vision and dream. That takes a boatload of courage.

It’s interesting that the number one attribute people consistently look for in a leader is honesty. Yet for practical and political reasons, honesty is hard. People resort to socially appropriate lying all the time. For example, if your spouse asks you if he or she looks fat wearing a shirt or dress, you may tiptoe around the truth for fear of hurt feelings … and incurring his or her wrath for having done so! The risks of hurting people’s feelings, or meeting with their reprisal for telling the truth, is why it takes courage to be truthful. Truth-telling comes with some dangers, hence the need for courage.

In the case of the entrepreneur, pitching to VCs is a good example of putting one’s TELL Courage to work.

In business, we’re taught to avoid mistakes. But you advise leaders to embrace them, especially when they move the conversation forward. What might this look like?

As a courageous entrepreneur, you have to have a higher tolerance for employee risk-taking and mistake-making. For example, one person with whom I’ve worked is Sara Blakely, the founder of Spanx, a multibillion-dollar international shapeware retailer. She often tells a story about her dad, who used to sit her and her brother down at the dinner table at the end of every week and ask: “Okay, kids, what have you failed at this week?” She says that the importance of extending oneself—even to the point of an occasional failure—is an important lesson she continuously reinforces at Spanx. A courageous leader sees mistakes as important learning events and evidence that people are stretching, growing, and being courageous themselves. That’s the kind of appropriate mistake-embracing I write about in Courage Goes to Work.

What’s the one piece of advice you hope readers take from your book?

Answer the Holy Question! Here are the four most important words you’ll ever learn in the English language: WHAT DO YOU WANT? Once you answer that question, you’ll have a goal toward which to point your courage.

To learn more about Bill Treasurer and his new book, visit his website.