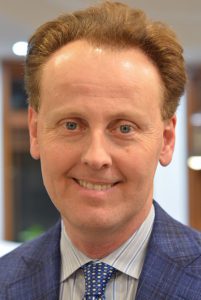 Successful entrepreneurs become that way by being on the leading edge of trends involving consumer behaviors and preferences and ways to capitalize on them. Such has been the case for Winnipeg’s Kris Thorkelson.

A licensed pharmacist since 1991, it wasn’t enough for Thorkelson to merely fill customers’ prescriptions. He knew he could do a better job anticipating and meeting their expectations for the whole pharmacy and pharmaceutical experience if he was in control as the pharmacy owner. A single establishment grew into four Prescription Shop stores, and he seized on another related trend – in-store medical clinics. He opened a pair of them in two of his stores, all of which he still owns today.

Over that time frame, Kris Thorkelson was watching the evolution of the Internet and e-commerce. He realized this could be an efficient and effective delivery system for pharmaceuticals from around the world, a way to buy and sell them at far more competitive prices than is standard with brick and mortar pharmacies. Because it wasn’t just the Internet and e-commerce that were trending – prescription prices were soaring and people needed an option to manage the bite.

Canada Drugs was the online pharmacy that he launched in 2001. Through it, millions of patients were able to buy medications without having to mortgage their homes to do so. “One of my pharmacy contacts was looking at this business model in 1999, and asked for my input,” Thorkelson said. “It led me to open Canada Drugs, a company that did a real service to many people. ”

Because there’s more to life as an entrepreneur than you can get by focusing on one arena, Thorkelson expanded his business interests into real estate. His My Place Realty (MPR) is a property management company that helps clients in Winnipeg find multi-family residences they are proud to call home.

Trend-spotting has served Thorkelson well, he says, and any young entrepreneur would do well to think creatively about ways to leverage the various developments that are changing how we live and work.

“I’m always thinking about this,” he says. “It’s had a lot of influence on the business side of my life. And the move to digital and online shopping is only going to lead to more pronounced – and transformative – changes.”

The pace of change makes it difficult to keep up and achieve entrepreneurial success in the process, Thorkelson says. “What I’ve found is that you have to be bolder and braver and stop worrying about rejection or making mistakes. Because both can be instructional over time,” he adds.

It’s not just acceptance of your mistakes that many business leaders tout. It’s giving yourself permission to fail – as long as you learn from it.  What failures have you experienced and what have you taken away from them?

Kris Thorkelson: A serial entrepreneur is always trying something new — and they don’t have to be all in the same kind of businesses. It’s the drive to create something out of nothing and watch it grow that motivates a person to shake off failure in order to achieve a degree of success in life – whether you’re a writer with a rejected manuscript, or like me, you have experienced some failures in business. It’s the motivation to create something new that helps you get past it.

Pharmaceuticals is a highly regulated business. What do you think are the two biggest  challenges of succeeding in a regulated environment, and is there anything you would do over?

Kris Thorkelson: Coordinating between the multiple points of contacts required when you’re selling a traditional product in a new way is a challenge. Online sales of pharmaceuticals at a lower price point represents clear benefits to consumers.  But, from the outset, it requires a definite business plan and a willingness and ability to adapt quickly to a rapidly changing online business environment.

You also have a lot of business interests. What have you done to balance them successfully and what has your fix been if the balance has gone off-kilter?

Kris Thorkelson: Businesses are like children. There are points in their development, especially in the early years, when they demand all of your energy. It’s exhausting and exhilarating at the same time. But as they get a bit older, they gradually gain some independence and you can relax a little.

Also, as an entrepreneur, I would suggest never forgetting the importance of delegating responsibilities to others.  This is vital to the success of any business.  No matter how skilled or accomplished a business leader is, they can’t do everything themselves.

My Place Realty seems to be something of a departure from your other interests. What was the appeal and why, and what do you think other entrepreneurs can take away from your philosophy about diversifying your interests?

Kris Thorkelson: From a business standpoint, real estate is generally a more stable investment than other forms of investments, and I do enjoy the closer connection with the end users of our product — our tenants, who I’m glad to say enjoy where they live and appreciate what we do to make their homes beautiful, safe and convenient. Real estate is brick and mortar — it’s the opposite of online work, but it shows you very clearly what’s the same and what’s different about running both kinds of businesses.

We understand that you support several worthy causes, including groups that sponsor families immigrating to Canada from war-torn countries like Syria. How would you encourage young entrepreneurs to think about undertaking these types of responsibilities, and what kinds of rewards can they expect?

Kris Thorkelson: First, I’ll say that we have a pretty great life here in Canada. You just have to turn on the news to see it, although I think sometimes we take it for granted. The sponsorship process is complicated and takes a bit of time, but each time you undertake a project, it’s a tremendous experience. I think young entrepreneurs are energetic and ambitious and could benefit from that learning curve — and it would do them good to meet people who are just as energetic and ambitious to succeed, if only they were given the chance to do it in peace.