When I was very young, my mother told me this folktale about a monk who lived on an island in the middle of a busy river. Frequent travellers across the river would stop to pay their respects in return for the monk’s blessings. Among them was a milkman who for years had been visiting the monk each day and would always leave a pot of milk behind for him. One day, the milkman fell ill and on his deathbed he told his daughter that she must continue the tradition of visiting the monk every day and leaving him a pot of milk since that was their way of serving the Lord. The daughter dutifully followed his instructions. Come rain or shine, she would row her little boat to the island, pay her respects to the monk and drop off the milk.

One particularly heavy rainy season, the river began to rise and it was obvious it would flood soon. Boats stopped operating and all activity ceased on the river. Yet, the young milkmaid continued to pay her daily visit.

On one of her visits, the milkmaid sought the monk’s advice for a dilemma —the flood would soon make it impossible to deliver the milk, yet she wanted to keep her promise to her father. The monk told her, “Believe in the Lord, and everything will be fine.”

She agreed, and to his surprise, she began to walk… on the water. As he stood there watching her in amazement, his mouth agape, he cried out, “How did you do that?!” She looked back seeming puzzled and responded guilelessly, “I am just doing what you taught me to do. You said believe and everything will be fine. I believe and… I started walking.”

Shocked, the monk lifted his robes and tried to do the same thing and immediately sank in to the water. “Why… why am I sinking? What happened?” he demanded floundering in the water. The young milkmaid answered, “I can see that you said His name, and I can also see as you started to walk, you lifted your robes, as if it would get wet. Why? Don’t you believe in Him like I do? ”

I know this is just a parable, but if you take a moment to understand it, it has a powerful message. When the milkmaid believed completely, she was able to do something incredible. People do incredible things every day because they believe they can. Belief is the single most powerful force in the Universe. When you believe, you can achieve anything. Great inventors believed in what they were doing. Despite repeated failures they kept going, driven by the belief that what they were doing had to work.

I am where I am today because of belief. A mentor once told me that when you encounter a mountain in your journey, remember the mountain is just incidental to the journey, and therefore immaterial. Thus, start climbing. What you are conquering is your greatest obstacle —your fears and weaknesses. Will the climb be long and painful? Probably. Will the challenges be great? Absolutely. But is it worth it? Without a doubt.

There is no shortcut to success. Think back to anything you have achieved in life that is worthwhile, and you will realise you earned it by working incredibly hard. What you struggle and sacrifice to get, you fight to keep.

Belief is fundamentally important to success. There is an abyss that lies between the one percentile of humanity; those who have accomplished great deeds and the rest of us. This one percentile who have successfully crossed over the abyss have done so merely through the power of their belief. That is the difference.

As you stand at the edge of the abyss, belief is the rope bridge that can carry you over to the other side. The question is whether you take it or not. A rope bridge that gets buffeted by the winds, soaked in the rain, and invariably hit by everything from hailstorms to icy rains, particularly as you try to cross over. However, as any seasoned mountaineer will tell you, crossing such a bridge is the ultimate test of one’s belief.

We all will come to this bridge at some point in our lives. This is inevitable. It is my inherent proposition that making the decision to cross is the first step towards acquiring belief. Crossing it is merely a testament to one’s perseverance. Reaching the other side just cements the proposition that belief truly conquers all. 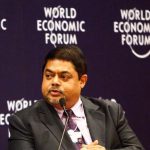 Vijay Eswaran is a successful entrepreneur, motivational speaker, and philanthropist and the author of the best-selling book “In the Sphere of Silence“. An economist by training, he is the founder of a multimillion-dollar global business, QI Group. A well-known thought leader in Asia, he has written and spoken extensively about business, leadership, personal development, and life management. His new book “Two Minutes from the Abyss: 11 Pillars of Life Management“ is now available as an eBook on Amazon.