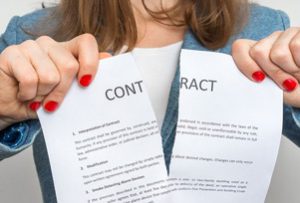 Unlike most countries in the world, where employers can dismiss an employee only for a valid reason, employment in the US is predominantly at-will. At-Will employment is a common term used in US labor law for contractual relationships, giving employers the convenience to dismiss employees without any reason or just cause for termination.

Such employment also gives the employee the advantage to leave at any time, with or without reason, without fearing adverse legal consequences. Respect for freedom of contract, employer deference, and the belief that both employers and employees favor an at-will employment relationship over job security, are the most common reasons that at-will employment is highly favored in America.

However, at-will employment only works well until an employee is wrongfully terminated based on illegal reasons like discrimination, retaliation or violation of an employment contract, says Jack Nichols, a reputed labor lawyer in Austin.

What is an Employment Contract?

In an employment contract, the employer is allowed to alter the “at-will” relationship with their employees. Under the contract, which can be either oral or written, the employer agrees to hire an employee for a specific period of time for a stated amount of compensation. The agreement clearly indicates that an employee cannot be terminated except under certain circumstances. The agreement may also cover some additional terms, depending on the employer and the nature of the job.

A breach of contract occurs when either an employee or an employer breaks one or more of the terms. It can also be called a failure to perform a promise that forms all or part of the contract. Some common breaches of contract that allow employees to claim compensation are non-payment of salary, especially during the notice period, non-payment of promised travel expenses and non-payment of sick leave or holiday negotiated in the employment contract.

What to Do in Cases of Breach?

In case you feel there has been a breach of contract, you should read through the hard copy of the contract and be 100% sure. If you are unable to understand the legal terms, contact an employment law attorney for professional help.

You need to be able to prove the existence of a valid contract. In addition, you need to gather evidence of the breach as well. It is this proof that will help you prove your eligibility for compensation for the damage caused to you due to the breach.

There have been cases where the employee was unable to prove the breach, just because the contract was not written well. There were terms that were not written down at all and were far more difficult to prove.

The best employment attorneys in Austin advise that the contract should be written down in detail to avoid future regret. So, when seeking employment, make sure you do not hesitate to ask for a detailed, written contract.