Traditional standards of value are changing as technology progresses at a screaming pace. With these changes, how our businesses adapt to them has to follow suit. Where once products, services, people, credit, liquid assets, and hard cash were the economic benchmarks that measured the success of a business, less tangible things are becoming more and more a part of true value.

The technology industry is reinventing the traditional definition of value and data is king. That would make them want to do a better job of protecting it, right? You’d think so, but they’re tripping up all over the place. You saw at the end of 2017 when Equifax announced a massive hack that left 143 million people’s personal information out in the open. The company will be facing legal, economic, and security issues that will negatively affect their bottom line for years to come. And they’re a multinational financial corporation!

In big business, data breaches, hackers, and security slip ups are inconvenient major mistakes that cost millions of dollars, hours, lost customers, and lost trust. A list of the world’s biggest data breaches displays the massive scale of compromised data in companies all over the world; these are predominantly large, powerful companies that have managed to stay successful in the face of data security failures, treating (or mistreating) such things as commonplace. The no big deal attitude of tech giants is humorously ridiculous.

But, what about when this happens to the little guys? The startups, small entrepreneurs, companies trying to make something new from the ground up? Sure you hear more about hackers targeting big tech companies, but they also target small businesses and startups because they’re more vulnerable and while the implications may not be as consequential to global economy, they’re much more devastating in the scope of personal and small business success.

Let’s look at what data value truly is and how it impacts business, people, and the evolving concepts of value and success.

The idea of data is difficult to define with concrete clarity, but data itself is broken into quantitative and qualitative facts that are directly correlated with human beings. That’s the most important thing to understand when applying value to data; us. The statistical collection and analysis of the who, what, when, where, why, and how of human beings is data. When your company takes those insights and applies them to creating products, services, or anything that people will purchase, you’ve just created value out of data.

That’s a very basic example of how small businesses turn data into tangible value. There are voluminous pieces on how big tech takes data terabytes-per-second and sifts through it in massive data farms, sitting on nests of user insights by the billions. In an excellent article called The world’s most valuable resource is no longer oil, but data, this idea is aptly put:

This abundance of data changes the nature of competition. Technology giants have always benefited from network effects: the more users Facebook signs up, the more attractive signing up becomes for others. With data there are extra network effects. By collecting more data, a firm has more scope to improve its products, which attracts more users, generating even more data, and so on.

For huge tech firms, data is valuable because the quantities they possess, control, and have access to is self-renewing and nearly limitless. This makes the data that small businesses have all the more valuable and in need of protection. Your small business doesn’t have the 2 billion users and $500 billion dollar valuation that Facebook boasts. Not having such a scale makes the data, users, and value that you do have more important to protect and more devastating if compromised.

If data isn’t perceived as your most important asset, you’re likely to be lax in securing it. If data security is breached, a small business doesn’t have a Facebook sized user base as cushion to soften the blow. More small businesses go under because they’re easy targets to hacking and it only takes one good breach to unravel them; you have to protect and monitor!

We know that small businesses have engineering teams of infinitesimal size compared to Amazon, Google, and the like. Which leads many to throw their hands up, exasperated, and ask: how – if companies that large and powerful in the tech industry are being compromised – do small businesses even stand a chance?

Constant vigilance and the proper attention to security measures will boost your immunity to breaches and take the target off your back to hackers. Remember, bigs companies are hacked and targeted most often because the data they have is larger scale, more difficult to get, and, in the end, more valuable to anyone who wants it (yes, there’s a Black Market for data), so they’re the juiciest targets in the crosshairs. But, this doesn’t make your small business immune!

Conscious data preservation is complex task that requires constant maintenance, but it absolutely begins with changing your perception of data and its value, both potential and literal. Formerly, companies thought of a hack/data breach as a loss of user trust and a failure to protect their privacy – which it absolutely is – but that’s not all. It’s the cumulative loss of insights and information that could have informed the creation of profit turning products that could have attracted the purchases of users who are now distrustful and lost. A failure to monetize freely gifted user information by an avoidable security misstep. It stings a little to phrase it that way, but small businesses must be aware of the sting because they don’t have the size and budget to treat a data breach like brushing dirt off the shoulder.

Protecting these insights bolsters the security of your business, your users, your products (present and future), and growth potential as you aim to scale in a competitive market. Starting a business might seem especially daunting in the face of the Amazons of the world, but remember that Jeff Bezos started in his garage in 1995. And it was centered around what human beings wanted. Whatever your business does, data and human beings cannot be split from one another. Adapt, perceive, and protect; data and humans are fickle subjects, but your future depends on them. 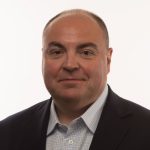 As the chief visionary behind Exigent Technologies’ long-standing success in the IT industry, Daniel Haurey stands out as one of New Jersey’s leading entrepreneurs and accomplished business leaders. His passion for success and fun-loving nature inspires Exigent’s high-energy company culture and white-glove customer service.