by Gavin Aubrey, founding Director of Think… Training & Development Ltd and author of “A Guide to Motivation, Happiness, Success & Resilience“

Hello, my name is Gavin. You may know me if you have attended one of my courses, been coached by me or listened to my podcasts on iTunes. For those of you who haven’t; nice to meet you.

I thought it might be an idea to give you a little background on why I feel comfortable publishing a book on Motivation, Happiness, Success and Resilience. I started the book here because this is where it all started.

My story is not a tale of rags to riches (although I did start a little on the ragged side). Financially, I’m doing very well for myself now; not a multi-millionaire but ok. So ragged to pretty ok! I have a fabulous wife, 3 ace boys, a fat cat called Bagel, an insane dog called Wilson (after the ball in Castaway) and two goldfish named Gfor (G for goldfish) & Ms Moneypenny. Every morning when I feed them I get to say morning Gfor, hello Ms Moneypenny, with my best Sean Connery impression.

When I was around 20, I was living in the hallway of a squat. The teenage love of my life had dumped me for the bright lights of London which had sent me into a spiral of self-destruction. Four years later, I was National Sales Manager of an insurance company managing around 70 staff and after that, my career went from strength to strength. So, what happened?

Well, I woke up one morning in the hallway of the squat and surveyed my worldly belongings. I had a blue racing bike, a camouflage jacket (my Dad’s from his army days), a white Adidas sports bag with all my clothing in it and a book by Dr Schwartz called “The Magic of Thinking Big“.

I’d been given the book a few months before and had planned to read it, but getting dumped distracted me slightly. That day I had nothing better to do so, in I dived.

The next day I was hitching a lift to stay with my parents, bike sold for £20. I had made two decisions:

Since then I have had a ferocious appetite for self-learning. I rose quickly in the corporate world, not because I was brighter or better looking than anyone else; I just knew more about motivation. Every team I managed achieved more than they had ever achieved before because I taught them how their brain worked!

Over the years I have held several senior leadership roles. In each role, I’m proud to say my staff either doubled their performance or reached levels they had never seen before. The more my approach worked, the more I learned and the more I was able to teach the people around me.

At 36, I decided I had done with climbing the corporate ladder, in truth I was a little bored. I needed a new challenge. So what better challenge than to go and start a new business with no clients and limited cash reserve!

My idea was to train and coach people all the things I had learned. At the beginning, I quickly realised that persuading companies to pay me and let me loose on their staff was a little challenging, but I was determined to make it succeed.

Fourteen years later, I’ve been fortunate enough to work with over 10,000 people around the world in locations such as New York, Sydney, Hong Kong, Kazakhstan, Tobago, Delhi, Switzerland and France. From Chief Executives to newly appointed managers, national newspapers to nuclear power stations. I have loved it.

When you coach and train that many people in so many different industries, locations and cultures, you begin to get some clues as to the truth behind motivation, happiness, resilience and success. I get no better satisfaction than seeing someone develop and grow after we have spent time together.

This is what this guide is about. Everything I have learned in the last thirty years about Motivation, Happiness, Resilience & Success.

We have magnificent minds; we just didn’t get any instructions! So, this is the set of instructions I have collected from everything I have read, observed and learned over the years. I hope you find them easy to absorb and apply. I have tried to keep them as simple and practical as possible.

When did you realise that people were different to you?

I quite often ask this question at the beginning of a training session. The room always goes quiet, so I ask the question again and shut up (just in case they hadn’t heard me).

The responses tend to fall into three camps:

I explain that I was a bit of a late developer. I only really realised that people were fundamentally different to me when I started my first management job.

As I mentioned in the introduction section, I had begun a journey of self-learning which had, based on my performance in sales and my ability to demonstrate at the interview that I knew all about motivation landed me my first management job. An expert is only one page ahead!

I was to be in charge of the South West of England and Wales sales team named Area 66. Nationally the company had 6 Area Teams; Area 66 were usually 5th or 6th in performance at the end of each year.

This is when I truly realised that people were so different. In my simplistic mind – in a sales job, if you hit your target, you get paid extra money. So all you need to do is work hard and hit your sales target, right? It never occurred to me that other people saw the world in quite a different way.

What I had learned about my personal motivation worked for me, but I quickly realised I needed to understand a bit more on what made others tick.

If my approach to working with Area 66 was  “can you just work harder and sell more” I’m certain the results at the end of the sales year would have been the same as the previous years; 5th or 6th in the country.

I realised that people were a little more complicated than amoebas (a one celled organism). If you poke an amoeba with a stick, it moves away. If you put sugar in front of it, it moves towards. This is also known as the ‘carrot and stick’ style of management. Useful if you happen to be managing a group of amoebas, which I wasn’t!

I changed my approach. Within a year, Area 66 went from 5th out of 6 Areas to number 1, with one of the team, Jane, achieving the number one individual spot.

So, what was it I had learned that made the difference?

To help understand your own and other people’s behaviour, I want you to picture an iceberg.

Behaviour is like the tip of the iceberg; the bit you can see. If you just focus on the behaviour, you won’t get very far in understanding yourself or others.

Drivers of behaviour lie beneath the visible waterline (the real essence and mass of the iceberg), which are your feelings, beliefs & values, combined with the influence of external factors (the environment).

To understand motivation, happiness, resilience & success you need to understand how the iceberg is made up and the influence the environment has on it. 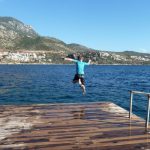 Gavin Aubrey is the founding Director of Think… Training & Development Ltd, which since its launch in 2003 has worked with organisations in Europe, India, Africa, Asia and the Americas to develop the management and leadership skills of thousands of employees. Gavin is avid podcaster attracting audiences download figures of 300,000+ in iTunes on subjects such as Influencing, Communication, and Myers Briggs amongst other things.