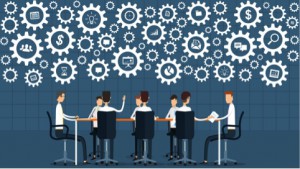 Wrike is a versatile project management software that enables multifunctional teams to collaborate and effectively achieve their aims from a single location. Users are given the ability to schedule, prioritise, converse, and monitor work in real time, culminating in tasks being completed with great speed and efficiency.

Such as its rise to fame, numerous Fortune 500 companies have made Wrike their project management software of choice, including EA Sports, Adobe, and Stanford University.

Wrike’s two most popular versions are professional and enterprise. The user’s needs determine which version is most suitable, but in general terms, the enterprise version is the stronger investment due to its enormous power. Wrike Professional, while still a more potent option over its peers, is more appropriately suited to smaller teams managing a project. The enterprise version is designed for teams that employ more advanced workflows. Wrike also offers free, business, and marketers versions.

After Airbnb CEO Brian Chesky had launched Experiences (a service offering city tours and the opportunity to meet up with locals), he made the bold plan to 4x his production from 12 cities to 48. Hoon Kim, the company’s Creative Production Manager, was responsible for streamlining a process that would enable the company to create literally thousands of assets, such as posters, videography, and photography.

Their answer was a gargantuan web-based spreadsheet, which wasn’t a model that could have grown with the company. It was unable to support the fast-moving changes, and various versions, with hundreds of website visitors using the website at the same time. It was also unable to manage the complex handoffs and workflows for the Experiences coordinators and three production teams.

Kim was introduced to Wrike at an Adobe conference. The software met the company’s strict criteria, with regards to security and functionality, and they haven’t looked back since. Kim admitted that life before Wrike was prone to mayhem and communication missteps. Thanks to Wrike’s task management and online scheduling solution, they now have the ability to scale without any such problems.

Wrike is also an impressive marketing tool. Its Gantt chart online helps track how a team is progressing, develop the most suitable assets for plans and strategies, and manage events. Further, it offers numerous benefits for creative teams, providing an Adobe CreativeCloud extension that takes into account administrative issues, such as admission and approval, so that the team can be left to their own creative devices. 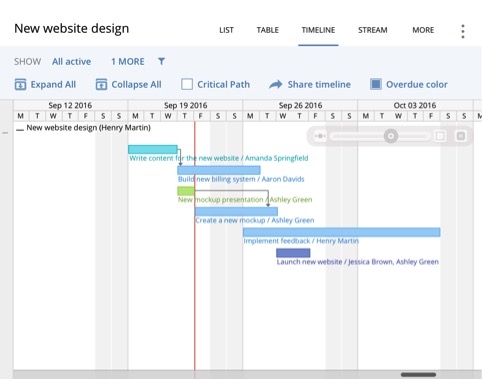 The software is further an all-in-one solution for enhancing product development and delivery, enabling teams to prioritise and assign requests in a flexible fashion that controls management from concept to completion. It intelligently manages resources and ensures that team members are limited to working on their assigned tasks.

Through the Google Chrome extension, Wrike turns any web page into a task. If the user’s website needs updating, they simply create a task and assign it to their team. The team members receive the task and can begin working on it immediately. The project manager or team leader can see all tasks their team is working on for that page. If the user is browsing a professional networking site and finds a prospective new employee, they can send the profile straight to the HR department as a task. Sharing information with their entire team is easy, too. Long gone are the days where team members are forced to sift through countless emails to find that all-important document.

The basic features of Wrike are included with the mobile app. As one of many free project management apps, the Wrike app is optimised for speed and while it is a powerful tool for any device, it has been developed for tablet use in mind. The app is free, but for those who wish to benefit from the more advanced features on-the-go, there is an option to register for a premium plan. The free version enables collaboration for a maximum of five users and provides all of the basic features. The professional plan, however, enables more features for five users, and an even more advanced plan allows up to 15 users.

Wrike’s app has been installed over 100,000 times on Android devices alone by everyone from startups to Fortune 100 companies. It is also available on iOS. 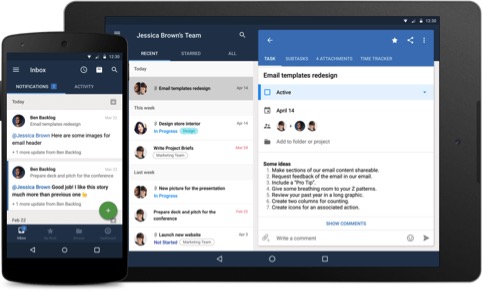 Wrike seamlessly integrates with software such as Google Drive and Dropbox. This enables users to further benefit from applications they are already using. For example, files can be attached in Dropbox directly to Wrike tasks with ease.

Wrike was founded by Andrew Filev in 2006. The company’s early operations were based in Mountain View before it relocated to San Jose, San California in February, 2016. It later opened offices in Dublin, Ireland, Kiev, Ukraine, and St Petersburg, Russia.