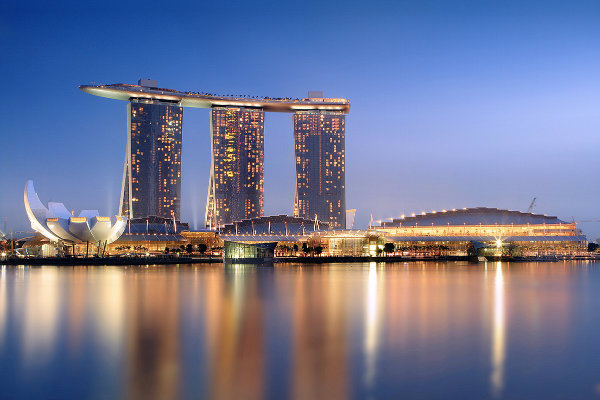 Hotels have long symbolised the glamour of international travel, at the high end at least, so it’s no surprise that they are an eternally appealing prospect for investors all round the world. According to figures despite, or perhaps because of, its relatively small size, Singapore is the fourth most expensive centre for investment in hotels in the world with only London, New York and Hong Kong ahead of it. The city’s remarkably high room occupancy rates have a great deal to do with this standing, as they do, at 89% while even London can only achieve 87%.

So in a world where supply and demand is key, Singapore does certainly have the ratio pretty much right.

The sheer range of different kinds of luxury hotel in Singapore is another clear appeal for investors looking for opportunities to exploit the buoyant market. One of the most significant developments has been the Marina Bay Sands Hotel. Largely financed by the Las Vegas Sands organisation, it was described as “one of the world’s most challenging construction projects and certainly the most expensive stand-alone integrated resort property ever built”.

Their total investment was thought to have been somewhere in the region of $8 billion and the result has been a 2,561 room mega hotel that opened in 2010. The aim is to earn $1 billion a year in profit and it is believed to be on track for this, assisted by significant casino earnings too.

Another very different kind of hotel that has also attracted significant investment is the iconic Raffles Hotel. With just 103 rooms and 103 suites it is a fraction of the size of the Marina Bay Sands but its global notoriety made it an appealing opportunity for the Qatar Sovereign Wealth Fund who are said to have paid $275 million for the hotel back in 2010.

To see that there is also a strong appeal in buildings re-purposed from their original uses to become hotels one only has to look at the Fullerton Hotel in downtown Singapore. Originally offices, and latterly a post office, in 1997 Sino Land spent S$300 million on converting it into a hotel and developing the adjacent commercial centre.

Investment as a whole.

There are also whole host of other reasons that make Singapore such an appealing investment prospect, whether in hotels, property or even commodities being traded on the Singapore market. For example the economy is strong, unemployment low and it is one of the most politically stable places in Asia. There’s also a highly educated population with correspondingly high earnings. This year it was also named by the World Bank in its 2017 “Doing Business”  report as second easiest  economy for business in the world.

So it looks like Singapore’s hotels are ideally placed to continue attracting inward investment from around the worlds for some time to come. Lack of physical space may be the constraining factor on new developments but, as the Fullerton Hotel has shown, that doesn’t mean existing buildings won’t be adapted for a new, and even more profitable purpose.

5 Tips From Mark Stiffler For New Tech Startups: How To...