by Mike Hoefflinger, author of “Becoming Facebook: The 10 Challenges That Defined the Company That’s Disrupting the World“

Do you or your company need a turn-around? Your business isn’t Facebook, but you certainly can learn from the social-media titan by examining how it operates — when things are going well, and not so well. The company’s ascension, chronicled in “Becoming Facebook“, is a business adventure of unprecedented growth, game-changing acquisitions, recovery from a chaotic IPO and a continuing defense against foes large and small. Above all, that climb was no accident.

Doing More with What You Already Have: “What is the Best Part of Your Day?”

Your company is your people. If things are not going well, they are not going well for your people. Therefore, a great place to start a turn-around is by becoming a strengths-based organization, one that focuses on each employee’s strengths and practically ignores weaknesses (or, more pragmatically, makes them irrelevant to each person’s role.)

Facebook is one of the leading practitioners of the strengths-oriented approach, a strategy that figures significantly in its position as the top employer in technology, according to the anonymous job-survey site Glassdoor’s “Best Places to Work in 2017.”

What’s the fastest way to transform your team to one that focuses on matching skills to challenges? Try asking your employees what the best part of their workdays is, and then work together to reconfigure jobs so that those activities become each employee’s major work role.

Decide On, and Obsess About, Your North Star Metric.

Facebook’s growth has been a very intentional pursuit, but it hasn’t been easy. As long ago as 2007, even before it reached a mere 100 million users, the company’s customer base had stopped growing. That’s when Facebook established a team dedicated to growth, and more importantly to a North Star Metric that enabled the entire company to focus its efforts and establish a systematic growth engine.

A North Star Metric is the single number that’s most indicative of how good a job a company is doing for its customers. The metric that Facebook chose to reflect its pursuit in making the world more open and connected was user engagement. (Initially, it picked monthly active users; then the more difficult to achieve but more relevant, daily active users.) For a company like Uber, it might be the number of rides booked. For eBay, gross merchandise volume.

If your business is stagnant or in decline, selecting and then obsessing on a North Star Metric just may be the best way to refocus everyone’s attention and substitute subjective debate with an objective reality. The rest, as Facebook’s head of growth marketing, Alex Schultz, put so effectively, is “just” work:

Turn Your Business Around When You Don’t Have to.

The best time to think about a turn-around — or at least a significant evolution — is when things are going well. Don’t wait until business begins to go south.

In early 2012, Mark Zuckerberg had every excuse to be complacent: Facebook had 900 million monthly users and it had won the contest for how people chose to spend their time online. Competition had been vanquished, revenue reached $3.7 billion, and a widely anticipated IPO was about to value the company at $100 billion. And yet Zuckerberg was thinking farther ahead about Facebook’s mission than practically anyone realized.

He was smart — and ego-less — enough to realize Facebook wouldn’t be the only way people would want to connect and share. He struck quickly to acquire Instagram when it had a mere 30 million users in 2012. Two years later, Facebook acquired WhatsApp when it had only 400 million users. Three years hence, those two companies have grown to 600 million and 1.2 billion users respectively. Along with home-grown Messenger’s 1.2 billion users and Facebook’s own 1.9 billion users, Zuckerberg has cemented the company’s #1 position in global consumer communication, holding off contenders such as Google, Twitter and Snapchat.

How would you disrupt yourself? Start working on that today. 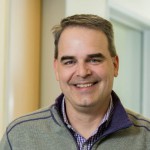 Mike Hoefflinger is a 25-year veteran of Silicon Valley. After working directly for Andy Grove at Intel and as general manager of the Intel Inside program, Mike moved to Facebook to serve as Head of Global Business Marketing. He is now an executive-in-residence at XSeed Capital, and author of “Becoming Facebook: The 10 Challenges That Defined the Company That’s Disrupting the World“.

Do Your Employees Respect You? Why It Matters What Type Of Manager...

5 Ways To Grow Your New Business

How To Organize A Successful Corporate Event