“We have now committed the Golden Rule to memory; let us now commit it to life.”  – Edwin Markham

This past week, I attended a couple of conferences and heard a few stories I’m still struggling to comprehend – some real gut-wrenching stuff. They’re the kind of things you hear or read about that can quickly result in a loss of faith in Corporate America.

These stories took me back to an experience I had a number of years ago when the .COM bubble busted. I was working for a startup which had the backing of a large financial services company. They relocated me and my family to Denver, as well as 15 other team members and their families from around the country. I was so excited to be a part of the .COM startup world and was willing to do whatever it took to succeed. After only a few months in our new surroundings, all hell broke loose in the market… and we all lost our jobs. The timing was pretty poor as HR people from the sponsor company unexpectedly came in from another state and gave us pink slips on February 14th. Talk about a Happy Valentine’s Day!

As my teammates and I were trying to make sense of the timing and deal with the shock of what transpired, one of the HR managers unemotionally stated, “Don’t take it personally.” She delivered this message with about as much sensitivity as a toll collector telling me I owed fifty cents on the turnpike.

Later in my career, when I was a young executive, I am embarrassed to say I leveraged a similar tactic. Just as we tend to repeat behaviors of our parents and teachers, I was “corporately raised” to believe this: when the going gets tough, tell your team members to not take it personally. Occasionally, I would even stretch this sentiment with a remark like, “Now, don’t be so emotional.” Pathetic, I know.

Thankfully, it didn’t take me long to realize how utterly ridiculous it was to use such language or have such a belief. First, I know how I felt on that fateful day, when I lost my job. I was devastated and demoralized. Second, if I were honest with myself, despite my thick skin I’ve received hurtful feedback from time to time — all because it was poorly communicated. So, how could I expect my team members to separate their personal and professional feelings, when I couldn’t do it myself? The answer: I couldn’t.

Leadership requires an expression of care and concern for people’s feelings. Frankly, it is personal. As human beings, we have one mind; one heart — and they’re processing work emotions, as well as non-work emotions. I know of no biological ability which compartmentalizes a boss’ insensitivity from other negative experiences you have outside the workplace. Negativity in our personal and professional lives hurts the same.

The same holds true for our interactions with other team members. Expecting they shouldn’t take things personally is a terrible excuse for unloading a bunch of feedback or doing something which would make a Buckingham Palace guard cry.

When we’re no longer on this planet, people won’t remember us for the things we did; they’ll remember us for the quality of our relationships. What are you doing to build and nurture the relationships you have with your teammates? Do you ever find yourself suggesting to people they shouldn’t take things personally at work? What do you think it would do for your own career and performance if everyone realized, it actually is personal? For me, it was a game changer. 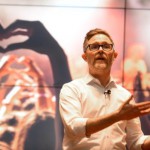 Chris Laping is the author of the newly released book, “People Before Things“. He is also the Co-Founder & CEO of People Before Things, LLC, a company focused on helping leaders create the conditions required to support large-scale, disruptive change. His blogs and book explore the connection of human experience to the outcomes of change and transformation and the role leaders play to pave success. To join the conversation, follow @CIOChris and @pplb4things on Twitter.